by Myles Painter
in Across The Pond, Bellator
36

In life, there is no greater joy for a parent then to witness their offspring succeed at something. In today’s episode of Across The Pond, you will meet a ruthless wrecking ball whose ability to capitalize on any opening combined with a rich MMA pedigree makes him one of Bellator MMA’s brightest young guns. A professional since April 2015 and representing Team Bodyshop, 22 year old AJ McKee holds a 7-0 record consisting of three knockouts, two submissions and two decisions. AJ is the son of MMA veteran Antonio McKee. 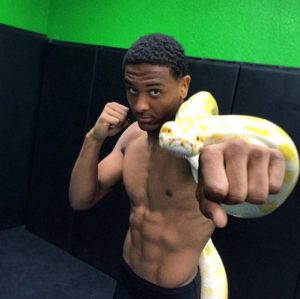