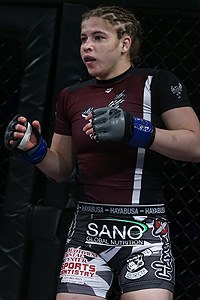 stars to hone their craft and make a name for themselves. In today’s episode of Across The Pond, you will meet a fearsome fighter whose aggressive submissions have transformed her into one of Invicta FC’S fierce young guns. A professional since November 2016 and representing Springfield Fight Club, 19 year old Miranda Maverick owns a 2-0 record with both of her victories coming via submission.

In her MMA debut at Invicta FC 20, Miranda submitted Samantha Diaz via rear naked choke in the first round. Then at Invicta FC 22 she submitted Kai Holiday via armbar in round one. Women’s MMA has a dangerous new force to reckon with in the very near future!