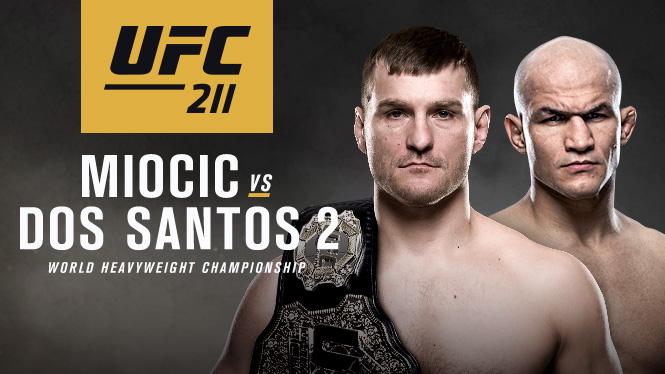 A rematch from UFC on Fox 13 headlines UFC 211, as current Heavyweight champion, Stipe Miocic meets Junior dos Santos (JDS) with the belt on the line.

As mentioned above, these two have met once before. In December 2014, Miocic and dos Santos fought a grueling five round war that ultimately dos Santos won via unanimous decision. Since then however, their careers inside the octagon have taken rather different paths.

Stipe’s route to the title

Miocic responded well to defeat and rebounded with TKO victories over experienced veterans, Mark Hunt and Andrei Arlovski. His quick annihilation of Arlovksi catapulted him to a title shot against then Heavyweight champ, Fabricio Werdum. This was the headline of UFC 198 in Werdum’s home country of Brazil and many wrote Miocic off before the fight. However, just two minutes and 47 seconds into round one, Miocic threw a right hand at Werdum, who was charging recklessly towards him, which knocked the Brazilian out cold. Miocic was crowned the new UFC Heavyweight champion and was the first man to defeat Werdum inside the octagon since dos Santos KO’d him back in 2008.

Stipe’s first title defence would be the headline of UFC 203 in his hometown of Cleveland, Ohio against experienced and well decorated striker, Alistair Overeem. After suffering an early scare in round one – when Overeem connected with a straight left that sent Miocic to the canvas – Stipe was able to take Overeem down and unleash devastating ground and pound that knocked Alistair out cold. After such a back and forth four minutes, both men were awarded a “Performance of the Night” bonus for their efforts. Miocic will now be looking to defend his belt for the second time, come May 13th.

Junior dos Santos took just over a year off after defeating Miocic back in 2014. The Brazilian returned to the octagon in December of 2015, where he took on the aforementioned Alistair Overeem. This was the co-main event of UFC on Fox 17 and things did not go according to plan for JDS. After an even first round, Overeem caught dos Santos with a left hand that dropped him to the canvas late in the second round. Junior was unable to fully recover and Overeem was declared winner by TKO. This loss upset dos Santos greatly as his rivalry and dislike of Overeem leading up to the contest had been well publicized. This marked only the second time in his career that JDS had been stopped by strikes.

Junior returned just four months later at UFC FN86 held in Zagreb, Croatia. His opponent was Ben Rothwell, who at the time was riding an impressive four fight win streak, all of which had ended via stoppage. On the night, dos Santos outclassed a lackluster Rothwell and used his athleticism and speed to walk away with a lopsided unanimous decision victory. A fight against Stefan Struve was quickly booked for UFC FN105 but was cancelled due to an injury sustained to Struve’s shoulder. Instead, dos Santos will now be looking to become a two-time UFC Heavyweight champion when he takes on Miocic at UFC 211.

How will the fight play out on the night?

On paper, this has all the ingredients of an instant classic. Both men are highly skilled, athletic and possess one punch knockout power. In their first encounter, many were surprised at just how tough a test Miocic was for JDS.

Constant pressure, combined with an accumulation of punches over the course of a fight is the best way to ware dos Santos down (as evidenced in his last two fights with Cain Velasquez). Miocic utilized this in their first encounter but perhaps lacked the necessary experience and killer instinct at the time to get the job done decisively. He also got dropped by dos Santos midway through the fight which undoubtedly knocked his confidence (as well as senses) for the remainder of the contest. Stipe was also hurt badly in his last outing against Overeem and looked at one point to be finished although he recovered exceptionally well and reverted back to his wrestling to get the win.

I was impressed with dos Santos’ last performance against Rothwell as he looked like the JDS of old. He used his speed, athleticism and power to confuse and frustrate a fatiguing Rothwell. JDS also became a father for the first time recently and cites this as added motivation to recapture the gold. Although he has hit a few roadblocks in his last couple of fights (and been in some toll-taking wars with Velasquez), I think a rejuvenated and motivated JDS will pose a problem for Miocic, who is there to be hit.