Former Welterweight Champion Matt Hughes has said he is open to a return to the octagon. Though while the UFC legend is willing to fight old rival Matt Serra, he made it clear he would not be interested in facing the younger generation in Tyron Woodley or Jorge Masvidal.

“I would love to come back. I didn’t want to retire in the first place.” Said Hughes. “Dana thought it was the best thing for me and so did my stinking wife. My wife said she didn’t want me to fight anymore and that it wasn’t as fun like when I was out there kicking ass. She didn’t like the worry, and Dana said the same thing, so that’s why I retired.”

“I would love to go out and fight again. My problem is, I lost my last two fights and that’s the only thing I think about is those stinking losses,” he went on. “What would be fun for me is to fight with my buddy Chuck Liddell, if he came out of retirement. It would be a blast to fight on the same card together.” 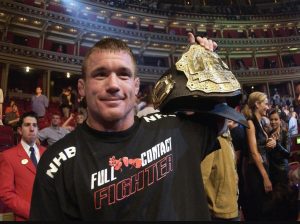 So who could the 43 year old be looking to fight upon his return? While there are a number of options open to him including Matt Serra, and former Welterweight contender Dan Hardy, it is clear Hughes is looking to make a ‘legends’ fight with an older opponent, as opposed to another run at the title.

“Of course I would have a list of who I want to fight and who I don’t want to fight,” said Hughes. “I think I could still be competitive, I haven’t trained in a few years. Now, I have no interest in fighting someone like Tyron Woodley or (Jorge) Masvidal, some of these young kids,” Hughes explained. “I would want to have someone close to my age that has the same speed, quickness. I think I have all kinds of power and can recover well, but that speed and quickness is a tough thing to overcome.”