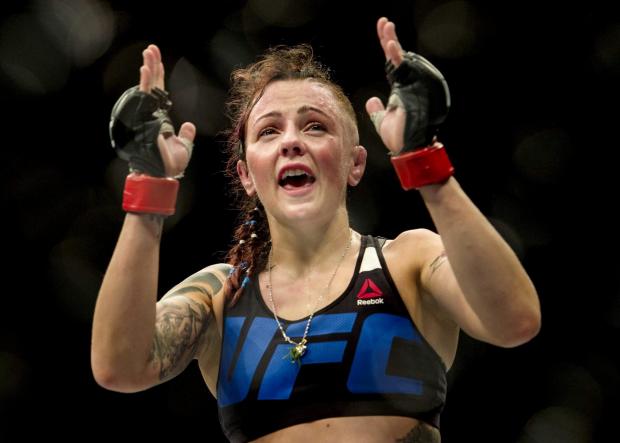 As UFC Glasgow approaches, fights have been coming out little by little, each time met with cries of, “JoJo needs to be on the card”. Today that’s a reality.

The UFC has announced the next two fights for UFC Glasgow with a possible co-main of JoJo Calderwood (11-2) vs Cynthia Calvillo (5-0). The main event is Gunnar Nelson (16-2-2) vs Santiago Ponzinibbio (24-3)

Calderwood is coming back from her last fight against Jessica Andrade last year which she lost by Guillotine Choke in the very first round. Calvillo’s last fight seen her win by rear naked choke against Pearl Gonzalez in the third round. Critics may wonder why Calderwood, who was hotly tipped to be in sight of a title fight is fighting someone who has had only two fights in the UFC. However, it’s not something that Calderwood will want to let fester in her mind.

Speaking to the Daily Record, Calderwood said, “I’m very excited. Now this fight is confirmed, I’m really champing at the bit. I know she is a great well rounded fighter, she brings it and it’s going to make an exciting fight. “I’m going in there to bring my best game. Let’s see what she brings to the chess table though. I’ll beat any attempts she throws at me and make sure she doesn’t take the W from me.”

The main event of the evening will be friend of Conor McGregor, Renzo Gracie Blackbelt and Icelandic star, Gunnar Nelson (16-2-1) who will be fighting former Ultimate Fighter: Brazil finalist, Argentinian Santiago Ponzinibbio (24-3).

Nelson is a submission specialist with four performance of the night bonuses in 9 fights within the UFC. Ponzinibbio is on a four fight win streak and will be keen to get a notch in his belt by taking out Gunnar Nelson.

There is still no sign of local fan favourites Chris ‘Badguy’ Bungard or Danny Henry who have been chomping at the bit to get into the UFC, with interviews we’ve done with them revealing this. Who knows, is there still time or will they make their debuts, if called up, somewhere else?

UFC Glasgow is bound to be an exciting one for Scottish MMA fans and we expect the tickets, which go on sale 2nd of June at 10am to go fast.