The state of Florida continues to cultivate high – end MMA talents thanks to world-class gyms and solid  pedigree  In today’s episode of Across The Pond, you will meet a cat-like fighter ready to flex her cla 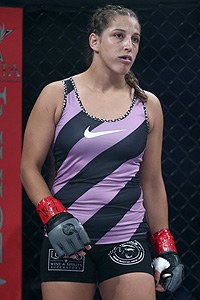 ws in Invicta FC. A professional since September 2015 and representing The Jungle MMA & Fitness, Felicia Spencer owns a 2-0 record consisting of one knockout and one decision.

In her MMA debut at Invicta FC 14, Felicia defeated Rachel Wiley via TKO in the first round. Then at Invicta FC 22 she defeated Madison McElhaney via unanimous decision. This jaguar is ready to pounce!