by Lewis Smith
in Cage Warriors
31

Cage Warriors has become the premier MMA organisation in Europe in recent years, and for good reason. With over 70 fighters making it to the UFC since it began, and an exciting mixture of upcoming talent – combined with battle hardened veterans, the promotion continues to grow from strength to strength. I recently attended Cage Warriors 83, in Newport, Wales, where another epic night of fights went down. Here is a run-down of my night.

Around 30 minutes drive from Cardiff and the surrounding valleys, Newport sits in a prime location to launch itself as a new Mecca of British MMA. The card, headlined by Lew Long and Che Mills, held a host of Welsh talent that had drawn an excited crowd to the small city that evening, and I found myself among them.

One thing I noticed immediately after entering the arena, was the intensity of the crowd that filled the Newport Centre. An atmosphere I would have only previously associated with a rugby or football match, it was a crowd not only fuelled by a passion for the local talent on display, but one with a deep appreciation for martial arts at the highest level. This high level of fights filters through the card, from the amateurs right up to the pros. In my opinion this is what makes Cage Warriors the most exciting organisation outside of the UFC at the moment.

You never know who you’ll bump into

Walking round the venue I was lucky enough to bump into several UFC stars including Tom Breese, Jack Marshman, and fighter turned analyst Dan Hardy.

As a Welshman, and a long time MMA fan, the most satisfying performance of the night came from Kris ‘Dez’ Edwards, in his victory over Damo Weeden. Fan favourite Edwards, broke a six fight losing streak, in what was an incredibly tense and exciting match up. Kris is a shining example of perseverance in the face of struggle, pulling off a comeback win that sent the crowd wild.

It was a fight that showcased both fighters technical skill on the mat, with Edwards ending it by rear naked choke in the second round – and proving why he was once Wales’s biggest prospect. With such a large support, and a few more wins like this under his belt, he’ll be right back up there again. 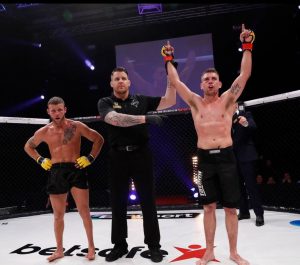 Other notable performances came from Josh ‘Crazy Horse’ Reed, who continued his march to a title, with a TKO victory over Gavin Kelly. Ireland’s Joe McColgan also put on an impressive performance, displaying an MMA clinic in a decision victory over Richard Williams.

After an early takedown, Shore completely controlled the Frenchman until he saw his opportunity to go for the finish late in the first round – jumping on an arm bar and forcing the undefeated French fighter to tap. Commanding a huge following all donning ‘Jack Shore’s on fire’ T-shirts, and a slick, well rounded skill set, it’s clear we can expect big things from Jack as 2017 begins to heat up.

The main event was cut short due to Che Mills suffering a knee injury early in round one, during a takedown from Lewis Long. I couldn’t help but feel sorry for both fighters. For Che who suffered the injury, and for Lew who finds himself so close to a call up to the UFC, but was left unable to showcase his skills. As I left Newport Centre I couldn’t help but wonder if we might see him on the UFC Glasgow card in July.