by Myles Painter
in Across The Pond
27

When a UFC fighter’s tenure in the promotion ends, they often turn to new promotion 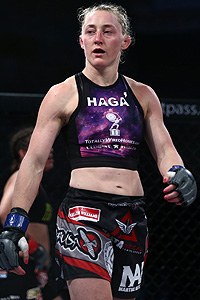 s to hone their skills and reinvent themselves. In today’s episode of Across The Pond, you will meet an aggressive, full-force submission artist looking to give her career a reboot in Invicta FC. A professional since June 2013 and representing Nor-Cal Fighting Alliance, Kelly Faszholz owns a 4-2 record in six career bouts consisting of three submissions and one decision.

In her MMA debut, Kelly submitted Kristen Gatz via rear naked choke in the first round. She also submitted Summer Bradshaw in round three via guillotine choke. Then, Kelly tapped out Brittney Elkin via rear naked choke in the second round. At Invicta FC 23 she defeated fellow UFC veteran Elizabeth Philips via unanimous decision. This fighter’s post UFC career is panning out rather nicely and we can’t wait to see what she does next in Invicta FC!