by Peter Knox
in MMA News
2

Saturday 27th May 2017 saw a landmark event for European MMA take place in the Polish national stadium, with 57,776 fans in attendance for KSW 39: Coliseum. KSW has cornered the MMA market in Poland and is boldly trying to market itself as a legitimate contender as Europe’s largest promotion. While Poland has been KSW’s main hub, president Mercin Lewandowski signalled ambitions in late 2015 holding KSW 32 in London, which was a well attended and well received show.

KSW 39 was the promotion and Europe’s largest MMA event to date, only being seconded in world MMA history by Pride’s 71,000. The drive to break the European MMA attendance record was a focal point of the build up to KSW 39. Being a Northern Irish MMA fan, when Ulster’s ‘Stormin’ Norman Parke was announced to fight undefeated 12-0 KSW Lightweight champion Gamrot, my interest piqued and it was an experience that did not disappoint.

The day before the fight, I had the pleasure of meeting ex-UFC Lightwieght and TUF ‘Smashes’ winner Norman Parke to aid his rehydration with 2 colleagues. What struck me first of all was the standard of the care that KSW put into their operation. Norman explained he had a doctor at hand for any health related issues, paid in full, expenses including a room at a 4 star hotel in central Warsaw and nothing to want for either himself or Next Gen N.I leader Rodney Moore in preparation. Fighters casually came and went in the hotel lobby and were happy to pose for photos with fans and fellow athletes. A super professional, fan friendly outfit.

On fight day, the magnitude of the event really sunk in as we made our way to PGE Narodowy. Thousands of Polish and international MMA fans packed the pubs and restaurants around the national stadium, which could be seen for miles around. There was to be no anti climax, the stadium was beautifully lit, with the roof closed, packed to the rafters. As the show began we experienced what Polska MMA was all about, live music, pageantry, legitimate high level MMA bouts for championships and a couple of freakshow fights including 5 time world’s strongest man winner Mariusz Pudzianowski. It felt like a homage to Pride, with a very polish spin.

The first bout of the night was for the inaugural KSW women’s flyweight title and saw Ariane Lipski def. Diana Belbita with a slick armbar in the first round, signalling another first for KSW in reaching into a second Women’s division.

Further up the card saw Marcin Wojcik lose his KSW featherweight title to Kleber Koike Erbst via a unanimous decision in an intriguing style match. Erbst’s Jui-Jitsu scuppered the Poles’ very direct style, with him spending much more time on the mat than he appeared comfortable with.

Finishes would flurry throughout the card, with only 4 bouts going the distance. At the business end of the card Mateusz Gamrot 12-0 vs. Norman Parke 23-5-1 was the second title fight of the night and the fight we really came to see. In the build up to the fight, Parke was dismissed as a heavy underdog and he struggled to find his rhythm in the early exchanges. Gamrot, a notoriously strong wrestler tried to shoot for the takedown on multiple occassions, but Parke was able to fend him off. On the feet Gamrot took the first round, with a greater output than Parke, but neither man seemed in trouble at any point. Round 2 saw Parke pressure Gamrot more, cutting off space and coming forward. This had mixed success, in the early part of the round Gamrot dealt well with the Northern Irishman’s pressure, but as the round went on Gamrot became more frustrated, shooting again without success. Defending the takedown, Parke attempted a guillotine, replays suggest Gamrot bit Parke’s finger, but the action continued with Parke protesting to the official while Gamrot continued to throw shots at Parke’s head, before the official finally stopped the fight. Parke, furious, shoved Gamrot for his perceived lack of sportsmanship, which did not go down well with the local support. Parke appealed to the referee and KSW president Marcin Lewandowski for a point to be deducted, but these were waived away. Video replays suggest that Parke had reason to be aggrieved. While this decision may well have cost Parke the fight in theory, it lit a fire beneath him that saw him push Gamrot hard in the remaining of the second and the third round. Parke piled on the pressure, appearing to hurt Gamrot at one point in round three with a solid left. Gamrot lived up to his mantle as ‘Gamer’ by frustrating Parke, seemingly believing Parke had to get the finish to win the fight. This turned out to be the case, with Gamrot taking the fight 29-28 on all three of the judges scorecards. Had a point been deducted or the fight been own neutral soil it would be hard to argue against Parke’s feelings that it should have at least gone to a fourth, deciding round, but it wasn’t to be. Parke walked away from KSW with his first loss in 3 fights since leaving the UFC, but with a very strong performance showing he can go with the best in European MMA and arguably better them, I hope we see a second fight. 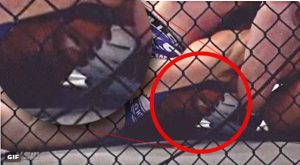 After the disappointment of the previous decision, we embraced the atmosphere and immersed ourselves in the upcoming fights, the results of which can be seen below. KSW have a solid media presence and I would highly recommend checking out the show via their Youtube channel. It isn’t very often you see a Polish rap artist and world record holding 5 time world strongest man fight on the same card with Mamed Khalidov headlining.