by Myles Painter
in Across The Pond, UFC
28 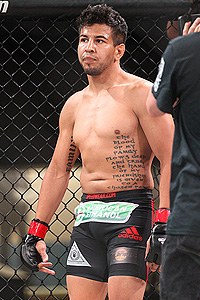 s. In today’s episode of Across The Pond, you will meet a ram-like fighter whose battering style has him poised to tear through the Bantamweight ranks. A professional since May 2013 and representing Genesis Training Center, Matthew Lopez owns a 10-1 record in eleven career bouts consisting of four knockouts, four submissions and two decisions.