by Myles Painter
in Across The Pond, Cage Warriors
0

In Mixed Martial Arts, fighters often use trips to other countries as a way of both personal and professional improvement. In today’s episode of Across The Pond, you will meet a fighter looking to constrict his opponents with a deadly ground game. A professional since October 2012 and representing Tiger Muay Thai, Adam Boussif owns a 9-6 record in fifteen career bouts consisting of seven submissions and two knockouts. 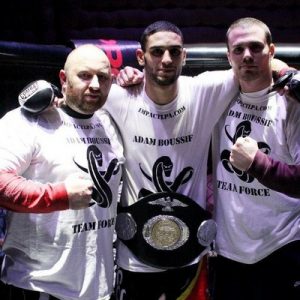 In his MMA debut, Adam submitted Danny Levins via guillotine choke in the first round. He also tapped out Nick Christie and Steven McGroary. Then, Adam defeated Chris Astley via TKO in round one. Boussif defeated his next two opponents via submission in Shane Riley and Phil Wells respectively. He defeated Mervin Pobi via TKO. Adam submitted Owain Parry via rear naked choke in the second round. He also submitted Jung Min Kang in round two via rear naked choke. At Cage Warriors 85 on June 24, Adam will face Ireland’s Ryan Roddy in a Lightweight tilt. Good luck Adam!