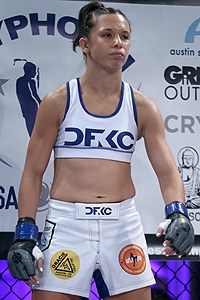 The Lone Star state is filled to the brim with fighters who know how to deliver the action. In today’s episode of Across The Pond, you will meet a sharp shooting fighter looking to light a fire in Invicta FC’S Atomweight division. A professional since March 2009 and representing Austin Kickboxing Academy, Tessa Simpson owns a 5-2 record in seven career bouts consisting of two submissions, two decisions and one knockout.

In her MMA debut, Tessa submitted Angelita Davis via triangle choke in round one. She defeated Hayley Cypert via TKO in the first round. At Legacy FC 23, Tessa defeated Paulina Granados via unanimous decision. She submitted Satomi Takano in the third round. At Invicta FC 18, Tessa defeated Simona Soukupova via unanimous decision. ”The Typhoon” is about to sweep through Invicta FC like a tornado!