by Myles Painter
in Across The Pond, Bellator
31 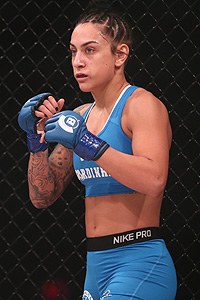 On July 14, Bellator MMA will return to Oklahoma with a card featuring many of The Sooner State’s top talents. In today’s episode of Across The Pond, you will meet an aggressive gunslinger whose high velocity pace has her poised to take a substantial leap in Bellator MMA’S  Women’s Flyweight division. A professional since September 2015 and representing American Top Team OKC, Emily Ducote owns a 5-2 record in seven career bouts consisting of three submissions and two decisions.

Emily defeated Ronni Nanney via unanimous decision. She also defeated Jianna Denizard via unanimous decision. At Bellator 159, Emily submitted Bruna Vargas via rear naked choke in the second round. She also tapped out Kenya Miranda da Silva via armbar in round two at Bellator 161. At Bellator 174, Emily submitted Katy Collins via rear naked choke in the first round. She will now face UFC veteran Valerie Letourneau at Bellator 181 on July 14 in a  women’s flyweight battle with a touch of international flare. Good luck Emily!