by Myles Painter
in Across The Pond, UFC
4 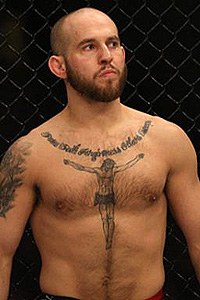 The state of New York has produced the likes of Matt Serra and many other household names. In today’s episode of Across The Pond, you will be introduced to a Bantamweight bull hoping to electrify the UFC once again at UFC Long Island on July 22. A professional since March 2011 and representing Maxum BJJ, 30 year old Brian Kelleher owns a 17-7 record in 24 career bouts consisting of eight submissions, six knockouts and three decisions.

Brian knocked out Nate Ainsworth in the first round. He won his next three bouts which included victories over Manny Millan and Michael LaDuke respectively. Then, Brian submitted Josh Parker via rear naked choke in the first round. He defeated Raphael Chaves via TKO in round two. Brian also defeated Bill Jones and Ryan Vaccaro respectively. He defeated Tyler Kahihikolo via unanimous decision. Brian tapped out Lester Caslow via rear naked choke in the second round. He also submitted Mark Cherico via guillotine choke in round one. At CES MMA 28, Brian defeated Andre Soukhamthath via unanimous decision. He submitted Jay Haas via guillotine choke in the first round. At Ring of Combat 52, Brian defeated Julio Arce via majority decision. He knocked out Josh Robinson in the third round at Ring of Combat 53. At Ring of Combat 54, Brian tapped out Julio Arce in round three via guillotine choke. In his UFC debut at UFC 212 he submitted Iuri Alcantara in the first round and earned Performance of the Night in the process. At UFC On Fox 25 on July 22, Brian will look to lower the ”Boom” on fellow grappling specialist Marlon Vera in a Bantamweight duel. Good luck Brian!