by Lewis Smith
in UFC
15

Floyd Mayweather and Conor McGregor are set to make history when they face off in Las Vegas in August- but the pair will kick things off with a world wide publicity tour, starting at Wembley Stadium sometime this month. 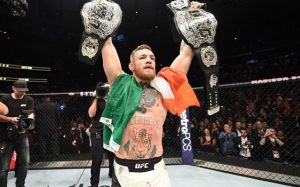 While the date and ticketing arrangements remain closely guarded, it is expected that thousands of fans could be in attendance for the start of the worldwide promotion. It is also believed the event will be free of charge.

Former pound for pound king Mayweather, will meet the two weight UFC champion, McGregor at the T-Mobile Arena, Las Vegas, on the 26th of August.

With both fighters expected to make upwards of 100 million dollars this is set to be one of the richest fights in history.

Live Results from BAMMA 30 : Philpott Vs. Walsh in Dublin