Former Cage Warriors and Titan FC Champion, Brett Johns (13-0) will make his second appearance in the UFC this weekend, when the promotion makes its return to Glasgow.

Brett will be extremely confident coming into his match up with Albert Morales, especially coming off the back of a unanimous decision victory over previously undefeated prospect, Kwan Ho Kwak. We spoke with Brett in the build up to this weekends action, to get his thoughts on his up coming fight. 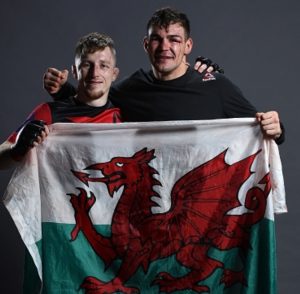 Interview with Brett Johns by Lewis Smith of MMA UK.

Brett, you’re just days out from your fight at UFC Glasgow, what’s your schedule like over the next few days?

BJ: It’s operation get super skinny. Just literally the weight cut, I’m looking at this video now and I can see my face has gone thinner over the last few weeks. It’s just part of the game, I don’t really enjoy doing it, neither does any other fighter, but the last two times I seem to have got it down to a bit of a tee so hopefully the weight will be the same as last time. We weigh in on Saturday and everything will be good then.

I’m the type of guy that when I’m up in Glasgow I like to stay in my hotel room, I won’t do much. I’ll be just chilling out, do my runs to lose the weight then get back to bed and drink. But this week sucks, this is the worst week now. We just get on with it and do what we’ve done the last two times, and put a smile on our face on weigh in day, and then it’s the fun time. The bit we get to enjoy.

And how will the late change of opponent affect you? have you had to alter your training camp due to this switch?

BJ: I don’t know with these fighters, they’re all pulling out at the minute. It’s doing my head in a bit, but luckily now we’ve got morales. First of all we got Gagnon who’s a stockier wrestler type with heavy hands, who’s five foot five. Now we’ve got a five foot nine boxer in Morales who doesn’t particularly like to wrestle. So It’s going to be a tough fight and I know that. I saw Gagnon as a harder fight to win, but I see Morales as a more dangerous opponent so I’m happy, and we’re ready to go.

How has the Welsh Public reacted to your success in MMA?

BJ: When I came back from Belfast I came straight back home and it was an amazing experience. I got back home and I saw 40 or 50 people from my local town in Pontardullais, outside my house wanting photos and having things signed. It hit home then how big this really was. But I don’t think it would have been as powerful – obviously me and Jack Marshman went out there- I didn’t see it being as powerful if one of us had lost. We just happened to be in two very good fights and Jack had a scrap. Everything was so dramatic that night it made it so much sweeter.

Who were the fighters you looked up to when you were a kid?

BJ: My top three, I’d say are Brad Pikett- I used to watch that guy every dinner time in school. I’d click on Pickett’s highlights and the WEC highlights because that was my weight. I remember watching the fight between him and Demetrious Johnson. He’s the pound for pound number one at the minute and Pickett beat him back in the day. I would definitely say he played a big part in me doing MMA. I’d also say Sean Sherk was a big one. I remember UFC 84 was the first event I watched and that was Sean Sherk verses BJ Penn. I liked those guys, and I liked Chanel Sonnen. Even before the Anderson Silva fights, I mean back when he fought Dan Miller in UFC 98- I used to like watching that style because it’s a very similar style to what I have, and that’s why I like watching him.

Can we get a prediction from you for this fight coming up?

BJ: Yes plain and simple, I won’t go into too much detail about the actual fight but I’ll promise one thing- there’s around 24 fighters on that card but only 4 bonuses- I’m going for one of those bonuses. It doesn’t matter how I get it. I don’t care. You can put me in a fight of the night performance or I’m going to stop him. If I’m honest it’s one of those fights for me, where I’ve never been so confident before a fight. This isn’t to say I think he can’t beat me, because he could land the right shot at the right time and that could put me down, but I don’t see it happening. There’s a lot of pent up aggress there, but I’m going for the performance of the night, I really am. 50K will be going my way on July the 16th. Wether it’s a sub, weather it’s a knock out, or weather it’s a fight of the night. The eyes will widen on July 16th and the people will get to see it. I’m looking forward to putting a dominant performance on.

Brett will once again fight alongside Welsh compatriot Jack Marshman, at UFC Fight Night Glasgow, on July 16th at the SSE Hydro.