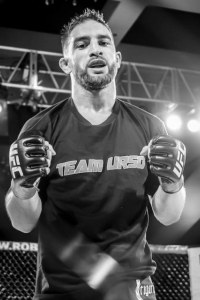 In MMA, Flyweights are known for their boundless energy and always putting the heat on their opponents. In today’s episode of Across The Pond, you will meet a sizzling fighter whose well rounded arsenal makes him one of New Mexico’s hot Flyweight prospects. A professional since February 2011 and representing the world class Jackson-Wink MMA in Albuquerque,New Mexico under the guidance of Greg Jackson and Mike Winklejohn, Nick Urso owns a 10-3-1 record in thirteen career bouts consisting  of three submissions, two knockouts and five decisions. Nick has appeared in American promotions like Resurrection Fighting Alliance.

How did you get your start in MMA?

– I was born into a martial arts family – my dad had his own kickboxing school and I began training at a very young age. As a young adult my interest was reignited when I began watching the UFC more and more. I started training with my dad again and began traveling to top level gyms.

How has training at a world class facility like Jackson-Wink MMA impacted your growth as a mixed martial artist?

– I started my full mma training at JW and threw myself into the deep end of the water at the beginning of my career. I learn from the greatest fighters in the world and compete with them on a daily basis.  It has been the greatest decision of my career to begin it all in Albuquerque.

If you could change one thing about the sport, what would it be and why?

– I would like to see the sport continue to grow and with growing I would like to see the athletic commissions also continue to grow and expand their skill and knowledge of the sport. I believe the more skilled the judges and referees are the safer and more proficient the fighters will be. Wins and losses should solely be on the athletes and not effected by poor judging and/or referees.

Tell us some interesting facts about your yourself.

– I’m an animal lover, a dog lover and most importantly a pitbull lover and advocate. In high school me and a couple friends rescued and fostered a very sickly litter of pitbulls and found them all homes.

Favorite MMA fight of all time.

What moment or moments have impacted  your career the most?

The journey itself is what impacts me – days that I feel untouchable and on top of the world and days where I feel like I have nothing left in me. It is a constant high and something I’m obsessed with daily. Everyday has such impact on me as a person and as fighter. In and outside of the cage and practice , all the moments come together to create a priceless journey I’m obsessed with.