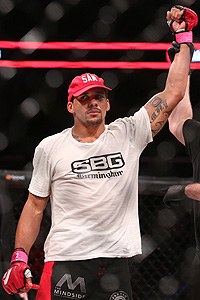 Many former collegiate athletes have turned to MMA as a way of keeping their competitive fire alive. In today’s episode of Across The Pond, you will meet a southern battler whose hard hitting mentality has him ready to tackle the UFC’S Middleweight division. A professional since August 2015 and representing Spartan Fitness in Birmingham,Alabama,  Eryk Anders owns a 9-0 record consisting of six knockouts, two decisions and one submission. Eryk has fought in several American promotions including LFA and Bellator MMA. He is also a former NCAA football star at the University of Alabama of the SEC.

How did competing on the gridiron at a top school like the University of Alabama prepare you for the rigors of MMA?

I learned how to out work everyone from playing football.

Tell us some interesting facts about yourself.

An interesting fact is that I am an Eagle Scout. I was in paramedic school before working at the gym full time.

What is your fondest memory during your NCAA playing days at Alabama?

winning a championship and going undefeated.

You are recently off an impressive UFC debut, what’s next for you?

Right now I’m in Europe traveling with my wife so I haven’t thought past today, but hopefully I’ll fight again in Brazil, Australia, or Madison Square Garden.

What are some hobbies you like to do when you are not training?

What is your favourite fight of all time?