The eastern United States continues to churn out dynamite prospects with high potential and well versed disciplines. In today’s episode of Across The Pond, you will meet a tenacious fighter whose bull-like style makes him one of Connecticut’s most dangerous assassins. A professional since September 2007 and representing Underdog MMA and Ascension MMA, Matt Bessette owns a 22-8 record in 30 career bouts consisting of eight submissions, seven knockouts and seven decisions. Matt is the CES MMA Featherweight champion and has also had a stint in Bellator MMA. 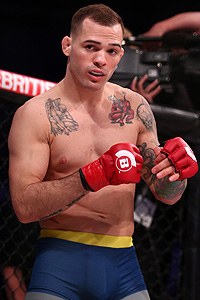 What inspired you to take up MMA as a profession?

I started training MMA strictly to be able to defend myself better. I never want to be that guy that was vulnerable in a physical altercation. I never knew I would decide to take it to this level. One thing led to another, though, and here I am.

How did you earn your nickname ”The Mangler”?

I earned my nickname from the president of NAGA, Kipp Kollar. He gave it to me before my first fight. It was for his organisation, Reality Fighting.

What is the most valuable lesson you have learned throughout your career?

By far the most valuable lesson that I have learned throughout my career is that you absolutely must be able to take your licks and come back stronger. There is no rise without the fall. There is no glory without the struggle.

My favourite MMA fight of all time is Eddie Alvarez vs Michael Chandler 1.