by Myles Painter
in Across The Pond, Cage Warriors
38 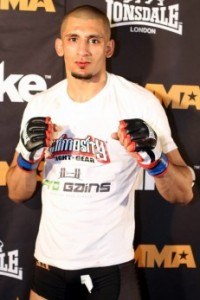 On October 14 at Cage Warriors 87, submission specialist Aiden Lee will aim for his third straight victory when he faces Welshman Phil Raeburn in a Featherweight affair. A professional since April 2015 and representing Fearless MMA, Aiden owns a 4-1 record in five career bouts consisting of two submissions, one knockout and one decision.

At Cage Warriors 80, Aiden submitted France’s Fabien Gallinaro via inverted heel hook in the first round. Then he submitted Poland’s Kacper Formela in round one via rear naked choke at Cage Warriors 83. In Welshman Phil Raeburn, Aiden is facing a fellow grappler who owns a 8-6 record in fourteen career bouts consisting of four submissions, three knockouts and one decision. Phil is coming off a unanimous decision over France’s Cosmin Tutu in April 2017.

Interview with Aiden done by Mick Kane of MMA UK-

You are scheduled to fight Phil Raeburn at Cage Warriors 87 in Newport, Wales. What do you know of your opponent? How do you see the fight going?

I know he’s experienced and will come prepared but I am too sharp and better than him in every area. He is tough but I will finish him.

You last fought in May beating Kacper Formela by submission in first round. Did you expect to beat him on the ground?

That victory moved you to 2-1 in Cage Warriors, how do you like fighting for this promotion?

I am 2-1 on Cage Warriors down to a bad day on my promotional debut, I am still 4-1 as a professional with 3 finishes. I am proud to be fighting on Europe’s biggest MMA promotion and showing my skills on a bigger platform.

Where do you see yourself this time next year and what are your ultimate goals within the sport?

If I get the fights I will be 6-1 by the end of this year so this time next year If I fight as often as I want to I should be at least 8-1 and be wearing the Cage Warriors World Title. My ultimate goal in the sport is to get that UFC gold strap and leave behind my legacy.

How did you become involved in MMA?

I always loved combat sports from a young age and had big goals in them while I was still in school. I started kickboxing and Muay Thai from a young age and competed a lot through my teen years, I started getting into the MMA training when I joined Fearless MMA in Birmingham and at this point I knew what I wanted to do, one thing lead to another and I was making my amateur debut.

I’d like to thank all my sponsors, Booster Fightgear, Monkey Nutrition, Balergoodchild, Renegade Jijitsu, The English Hypnotist. If anyone is interested in sponsoring me or getting involved get in touch through my Facebook page or my Instagram @aidenleemma .