What is the current state of the UFC 145lb division?

After the destruction that was hurricane McGregor swept through the featherweight division, things seem to have rebuilt, upgraded and taken a dramatic swing from the least interesting division in the entire organisation, to arguably the most exhilarating and talent filled.

The emergence of Max Holloway has given the title the credibility it so desperately needed. The current 11 fight win streak is amongst one of the most impressive in the history of the sport. With Frankie Edgar in the near future, there is an opportunity to see the end of the old guard.

This will come as no easy task, Frankie has recently put the brakes on another young talents run, When putting a brutal beating on Yair Rodriguez to earn the title shot. As well as been a previous champion in the division above.

Another member of the old guard in the 145lb division is Cub Swanson, who co-incidentally is unbeaten since his encounter with the current champion, he is also very keen to get that one back too.

The division is not built on Max and the legends alone though. Courages efforts and spectacular knockouts from the the likes of Rodriguez, Darren Elkins and the Korean Zombie Have brought the excitement and energy back.

I also personally believe an eye should be closely kept on Brian Ortega. The Gracie trained black belt, under Rener Gracie is providing us with war after war. His previous four bouts have all gone to the third round. One thing that may surprise you though, not one of the fights went the distance. Ortega was able to finish all 4 fights with a TKO, KO and 2 subs.

So I have managed to get to this point of the article without mentioning the longest reigning featherweight champion the UFC has ever had, who is currently ranked #1. Why is it that I haven’t spoke of Jose Aldo? It certainly isn’t a question of his greatness, more to his relevance?

Controversial I know, but where is it exactly Jose goes now? The UFC fan of 2017 knows a different Jose Aldo ,to the MMA fans who remember the WEC. So unfortunately this relates to PPV buys , and this relates to the bouts we will see Aldo fight in the future.

A notable point is that this interest in the division has been created after the removal of a long reigning champion. I believe this follows a trend. When GSP retired the welterweight title had numerous contenders who all had just as much chance as the other to be champion. When Ronda was dethroned in Australia, the title changed hands, contenders emerged and the division lit up.

I will leave you with a final thought, I currently believe the 145lb division has to be the most exciting in the UFC, but the longest current reigning champion is Mighty Mouse. Is everyone excited for 125 to blow up? 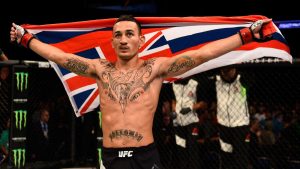