by Lewis Smith
in Cage Warriors
31

After a submission victory in his last out, fan favourite Kris ‘Dez’ Edwards will return to the cage this October, where he takes on Brent Crawley at Cage Warriors 87. We caught up with the Welsh Bantamweight to see how he feels ahead of his next match up, and what the future holds for the Abertillery native. 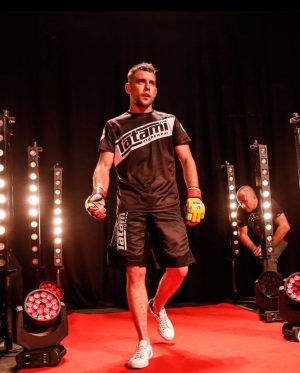 “I’ve been in the game a long time now so it felt good to get back winning,” said Edwards in a recent interview with MMA UK.

“I worked really hard for it, but I wouldn’t take an easy match up just to get a win back. I want to keep going against the toughest opponents because that’s what I’m all about. I’m going to get another win on October 14th and get a run going again.” 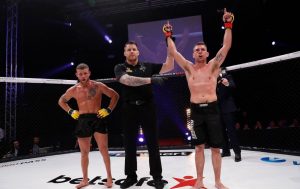 Edwards (9-9) has long been praised for his exciting style of fighting, as well as his sound technical ability in all areas of the game, though it’s not all been plain sailing throughout Edwards’s career. After a five fight losing streak many thought they may have seen the last of him – but say what you want – there’s no quit in Kris Edwards.

“I would never just stop because I love it,” said Kris, speaking out of the newly refurbished Tillery Combat facility.

“The team is a huge part of my life, and I’m a different boy when I’m in here. Us boys are constantly trying to pass on what we’ve learned in the past and I think that shows. Particularly when you see the likes of Jack Shore and Josh Reed fighting like pros of 20 or 30 fights.” 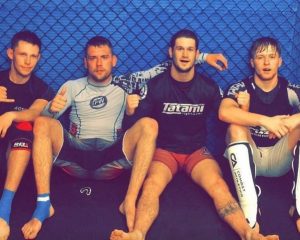 Speaking with Kris in a post training interview, it’s clear to see this man is a lifelong martial artist who’s passion for fighting extends well beyond the cage.

So what can we expect from the Cage Warriors Veteran in his coming bout with Brent Crawley? With a strong fan base, as well as one of the strongest fight teams in the country behind him, it would seem once again the sky’s the limit for the 27 year old to begin his climb up the rankings.

“It’s going to be a good fight. I haven’t really looked at him too much to be honest, but I’m always in a good fight so it won’t be boring,” said Edwards.

“If he’s meant to be good at standing up then I’ll stand up with him, but if he wants to go to the ground we can go to the ground. Either way I’ll make a good fight of it like I do every time.”

Kris Edwards will take on Brent Crawley on the main card of Cage Warriors 87, October 14th, at Newport Centre.