by Myles Painter
in Across The Pond
24

When the cage door slams shut in MMA, a fighters instinct and burning desire for victory kick in. In today’s episode of Across The Pond, you will meet a Canadian lioness ready to pounce on the UFC’S Women’s Bantamweight division. A professional since May 2010 and representing Toshido MMA, 29-year-old Sarah Moras owns a 5-2 record in seven career bouts consisting of two submissions, two knockouts and one decision. Sarah is best remembered for her stint on The Ultimate Fighter season 18 Team Rousey versus Team Tate. 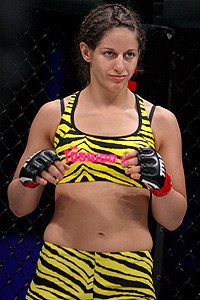 In her MMA debut, Sarah defeated Helena Martin via TKO in the second round. She also defeated Julianna Pena via TKO. At AFC 11, Sarah submitted Christina Barry via armbar in the first round.  in 2013 she was selected to be a part of The Ultimate Fighter season 18 cast. To get into the house, Sarah defeated Tara LaRosa via unanimous decision and was the second female selection made by coach Miesha Tate. In episode nine she submitted Peggy Morgan via armbar in the first round. In her official UFC debut at The Ultimate Fighter 19 finale, she defeated Alexis Dufresne via unanimous decision. Following a two-year layoff Sarah returned to action to face Ashlee Evans-Smith at UFC 215 and submitted her via armbar in round one. This lioness is ready to flex her claws at 135 pounds!