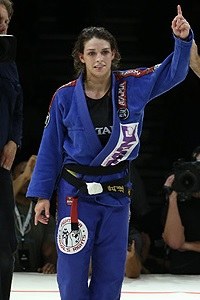 Competing in other disciplines before making the transition over to MMA will prepare you for the mental and psychical rigors of the sport. In today’s episode of Across The Pond, you will meet an American Jiu- Jitsu- champion looking to continue her hot start in the professional ranks at LFA 24 on October 13. A professional since July 2016 and representing The MMA Lab under the guidance of head coach John Crouch,  24 year old Mackenzie Dern owns a 3-0 record consisting of two decisions and one submission.

In her MMA debut at Legacy FC 58, Mackenzie defeated Kenia Rosas via unanimous decision. Then she submitted Montana Stewart via rear naked choke /omoplata in the first round at Legacy FC 61. At LFA 6, Mackenzie defeated Katherine Roy via unanimous decision. At LFA 24 on October 13 she will look to make it four in a row when she faces Mandy Polk in a Women’s Flyweight contest. Good luck Mackenzie!