by Luisa Morlano
in MMA News
37

“I am going there tomorrow to take him out.”

Ahead of his big fight tomorrow against Donald Cerrone in Gdansk, UFC fighter Darren Till took the time to speak to MMA UK before the weigh ins. 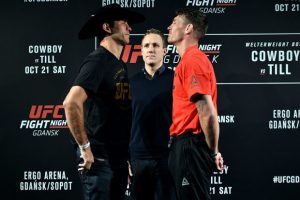 MMA UK: How are you doing today?

Darren Till: I’m ok, obviously this morning I weighed in so I’m just trying to rehydrate and you know get, everything that I need back into myself for the weigh in tonight. I am just chilled in my hotel room just relaxing.

MMA UK: What does the rest of your day look like?

Darren Till: We are going to go do the weigh ins in a few hours and then after that, I have booked a table for tonight so we are all just going to go get some food. I am looking forward to that.

MMA UK: How did the media day go?

Darren Till: It was ok, it was a tiring one because it was a day before weigh ins, and you just got to do it but as soon as I got involved, everyone was asking questions I just got into it so it was cool.

MMA UK: You lived in Brazil for a while and I saw on one of your videos on YouTube someone commented from Brazil saying you basically sound like one of them.

Darren Till: I can change my voice to make it sound like a Brazilian but I don’t know if its true but hopefully the best I can get, the closest I can get to speaking Portuguese like a Brazilian is my goal really so if they say that, that’s actually a nice thing to say.

MMA UK: How do you feel about getting into the cage tomorrow?

Darren Till: The thing is I got mixed emotions, I get a excited I get a bit nervous but you’ve got to be able to control all these emotions. I always say if you can’t deal with the pressure you shouldn’t be a fighter. Nerves is a big thing you know I have seen fighters before fights get scared. I am just relaxed you know I am happy to fight, it’s the big stage. I can’t wait to get out tomorrow and just fight Cerrone. Let’s just get it done.

MMA UK: What does it mean to you to be the main event of the biggest promotion in the world fighting such a high-profile fighter such as Cerrone?

Darren Till: I am just seeing it the same as any other fight I don’t want to add extra pressure to myself. You know to me it doesn’t matter who is across the cage, I don’t see a Donald Cerrone, I don’t see a face there, all I see is a human body that I want to beat. Obviously, there is an added extra pressure that everyone will put on you but I don’t really care about that. I want to do what I love and I love fighting it’s as simple as that.

MMA UK: What do you think of your opponent Donald Cerrone?

Darren Till: I think Cerrone is just a genuine guy. I really do respect him, I’m a fan because of obviously who he is. I just keep saying the same thing it doesn’t really matter, what he is, what I am, I am going there tomorrow to take him out. After the fight is over it’s always respect you know, right now it’s time to fight, there will be no hard feelings regardless of what happens. Tomorrow is fight day; we are both going to go into that cage and I am going to win. I know I am going to win, I know it deep down.

MMA UK: What do you think will be Cerrone’s strategy?

Darren Till: I don’t think Cerrone is going to want to stand up with me, I think he is definitely going to try

and take it to the ground, he is good on the ground he is a black belt but I don’t think so I think that’s what his strategy will be. My strategy is the same as ever just go up there fight because I know I am the best fighter in the world, I know that no one can stand up with me.

MMA UK: You have shown great confidence, where do you get it from?

MMA UK: How do you think will this fight impact your career?

Darren Till: It doesn’t really matter because people are saying it will shoot me right into the top, maybe it will maybe it wont, I just don’t care I just want to fight and keep making my statements. At the end of it all I just want to be remembered for being the best. The only 2 things I need to do is train really hard and believe in myself. Thats my job.

MMA UK: Do you think there is additional pressure on both sides to win because you are undefeated and Cerrone lost both of his last two fights?

Darren Till: I don’t think Cerrone is feeling pressure right now, I will say the reason for that is I think Cerrone fights for pay-checks nowadays. He was fighting the best in the world when I was 10 years old. I’m 24 now he’s been around so long and obviously, he’s coming to beat me but I think he is more interested in his retirement fund which is clever. But I am not thinking about retirement, I’m not thinking about the pay-check. I am an upcoming, hungry guy, I am coming to beat Cerrone and you know I just don’t believe he has the same will and desire as me. I really don’t believe that his will is stronger than mine. My will is so strong I will not quit.

MMA UK: What is the proudest moment in your career?

Darren Till: Getting this fight right now I can say I am the proudest and happiest man alive, I am just enjoying these moments of my life you know life is not forever.

Darren Till: Yes, I am back in Liverpool full-time, living and training there. I think there is different type of training, Brazil is more ground effective and England is more striking effective. For what I need I think England is the perfect place. I just spent my time in Brazil, 4 years which is a long time but now I am back to where I belong which is Liverpool, that’s my place.

MMA UK: Do you have any rituals before a fight?

Darren Till: I do watch some football when I have some free time.

MMA UK: Last question, are you red or blue?

Darren Till: I am red.

Thank you Darren Till for doing this interview so shortly ahead of your fight and good luck for tomorrow.