WXC 70 will be featured on Fight Pass, Brueckner Vs Smyth as Main Event

The 70th anniversary show for Warrior Xtreme Cagefighting set for Veteran’s Day 2017 now has it’s main event. A welterweight bout between two young up and coming fighters will hit the WXC steel on November 11th as Devin Smyth (5-1) will lock horns with Josh Brueckner (2-1). The winner of this fight will earn themselves a shot at current WXC Weltwerweight champion Evan ‘The Butcher’ Cutts (8-3) in 2018.

Hailing from Lansing, MI ‘The Prodigy’ Devin Smyth has won his last five fights, with four coming by finish. These five wins come after his lone loss, which also was his pro debut in May of 2014. Smyth won his WXC debut in his last fight at WXC 69. In that match Smyth was able to submit Darrius Flowers by rear-naked choke in the very first round. Of his five pro wins, four have come by submission. The Murcielago trainee was also (2-0) as an amateur with finishes in both wins.

Fuse MMA product Josh ‘G.I.’ Brueckner looks to win three in a row at WXC 70. Brueckner has currently won two in a row after losing his pro debut in October of 2016. His first pro win came at WXC 69 back in July as he knocked out Rocco Saracco in the first round. He added another win in August as he got his first submission win, pro or amateur in the first round. Before his pro debut in October of last year, Josh was undefeated as an amateur at (7-0) with six wins coming by way of knockout.  These two 22 year old warriors will look to put on a show and make a name for themselves as one of the best fighters in Michigan.

Warrior Xtreme Cagefighting is also proud to announce that WXC 70 on Saturday November 11th will be available to watch on UFC Fight Pass. Starting at 6pm EST on Sunday November 12th, the entire fight card of WXC 70 will be able to be watched on the streaming platform. UFC Fight Pass is a digital subscription service which gives fans access to exclusive live UFC events and fights, exclusive live MMA and combat sports events from around the world, exclusive original and behind the scenes content and unprecedented 24-7 access to the world’s biggest fight library. Fight Pass can be accessed on your TV via your favorite streaming devices, on mobile devices and any personal computer.

Tickets for WXC 70 are still available and can be purchased here and are priced as follows; Bleachers- $30, General Admission- $40, Cageside $65, Front Row- $100, VIP table- $700. Visit WXCMMA.com for more information on this event including updates and the complete fight card. 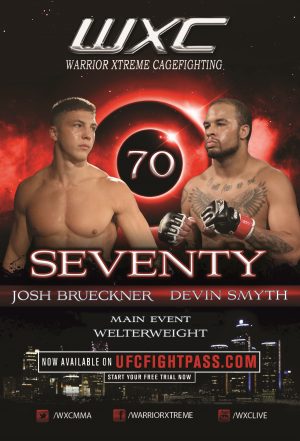