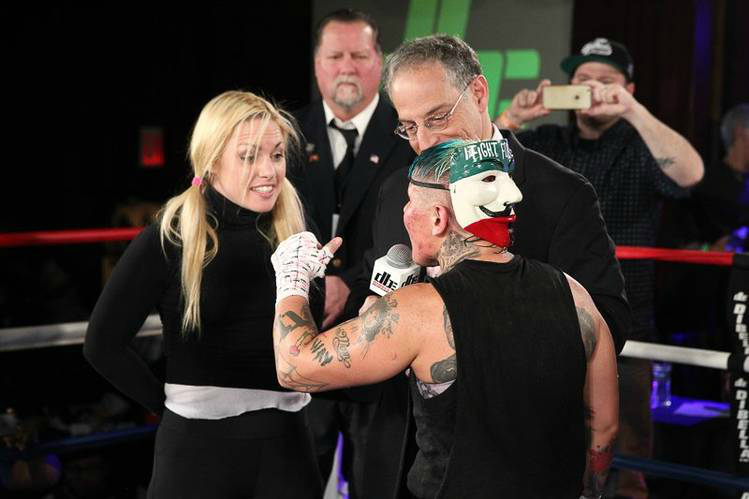 Bellator‘s weigh-in ceremony was crashed this week when Shelly Vincent confronted MMA rising star Heather Hardy during her faceoff. The two have been feuding since they fought for the WBC International Female Featherweight title last year, Hardy winning by majority decision. Vincent has since been campaigning for a rematch that won’t be persuaded by a hometown crowd and told MMAUK that if fans asked for it she’d meet in the cage.

MMA UK: What did you think of last night’s Bellator185 fight card, was this your first time attending a Bellator event?

Shelly Vincent: No, Brennan Ward is actually one of my childhood friends and his father was one of my first trainers so really I was going to see Brennan and Heather just happened to be on the card.Whenever  he’s fighting I try to make it over. The energy over there is crazy especially when Brennan’s fighting.Obviously, he was pulled from the card because of his injury so I thought well let me go over there and see what this girl’s doing.

MMA UK: Is that why you crashed the weigh-ins?

Shelly Vincent: I’ve been reading all the posts like “You Conor McGregor wannabe”. Well for one, I’ve been calling out Heather to fight for 5 years so I actually went to her fight at the Roseland ballroom and that was the first time that I tried to get her to fight and it was always no no no. That was earlier in her career and I saw that they were blowing her up. So I’ve been doing it like that but I’ve just never gone up in a weigh in and I was in the area, I’m from that area.We were looking to rematch in April but she was asking for too much money. Everyone knows in women’s boxing asking for 100,000 dollars you’re outbidding yourself.

MMA UK: Was your confrontation a hint at a future rematch between you two?

Shelly Vincent: I saw her article about being a sexual assault victim and I’m an assault victim so I said look victim to victim I like what you said there. She said look Shelly as long as it’s on tv I’ll rematch you in Connecticut and settle for less money but then she didn’t want to fight me, she doesn’t want to fight me because she knows she didn’t win the first time. You know how the backside of combat sports goes, the commentators tell the public who they want to win. I said it in all my interviews I’m going to get robbed if I don’t knock her out.But it was a great fight, women’s boxing was on our shoulders and we delivered.So I’ve been asking for a rematch and I wanted to let the public know I’ve been ready for that rematch.

MMA UK: If a rematch in the ring isn’t looking like an option, could one in the cage be a possibility?

Shelly Vincent: A bunch of MMA people came up to me after the weigh-ins but it’s not what I’m looking to do.I wouldn’t even know what I’m doing in there, its too much stuff to learn and I’m too progressed in my career and my sport. My ultimate goal and what Heather said hers was was to progress our sport and to fight for women equality.We finally get there and start to make history and then she abandons our sport.

MMA UK: Do you disagree that crossing over into other sports can be helpful for a career or the sport itself?

Shelly Vincent: It’s helpful for the individual but not for our sport if everyone’s leaving. I understand it’s frustrating and we don’t get paid like we should but I don’t think it would help me crossing over. What I did say is if the public wanted it and she’d give me my rematch in our sport first then I’d go over to meet her in MMA and that would be my only fight. If that’s what the public really wanted because I’m here to entertain but trying to build a career over there Hell no. I’m not trying to have anyone kick me in the face.That’s why I wrote that post driving home last night after her fight, I felt for her daughter having to see her like that. Me and Heather don’t like each other, the beef is real but I wouldn’t wish that on anybody. Some people said did you step up at the weigh-ins to get in her head? No that wasn’t my intention I said I hope she makes it, I hope we all make it.

MMA UK: Some female athletes feel like their fights are stopped too early due to the public preferring a less bloody bout between women, do you feel like Heather’s was? Have you ever experienced that?

Shelly Vincent: I think they should have stopped it in the first round. She seemed out of her element. When you’re a pro in your own sport you have to go pro in another combat sport immediately. When you do that it doesn’t matter if your opponent is making their pro debut they got experience in the amateurs. Now you’re stepping in with someone who has experience and you’re just learning. In a way if  I was an MMA fighter I’d feel kinda disrespected like you didn’t take the steps on the ladder to get to this level. Vise versa if an MMA chick tried to come over to boxing I’d be like you don’t belong here let me show you why you don’t belong here. You’re taking that risk of meeting someone with that mentality.

MMA UK: While you wait for that rematch you’ve got a fight coming up next week, what other accomplishments are you looking to achieve in your career?

Shelly Vincent: I’m sure after last night she’ll be out of commission for a while but when she does return to boxing it’s the next fight that makes sense right? To tell you the truth I’m on my way out, I want to get another belt and defend it a couple times and then go on with the next chapter of my career. I’ve been in talks about a commentary job and I’ve been asked to train a pro MMA fighter that’s looking to make her transition into boxing.I want to be a voice for the voiceless. I always walk out with a group of kids, the V for Vendetta mask and a straight jacket. Everyone always thinks I wear it to look crazy but everything I wear has deep meaning. The mask is a character that fought through everything his enemies tried to throw at him and the straight jacket is to relate to how women are still tied down in sports and how I’m looking to break free of that and my own personal demons battling with depression. Boxing has been my outlet and I’m looking to help others to keep fighting.

Shelly Vincent makes her return to the ring on October 28th,2017 at Foxwoods Resort 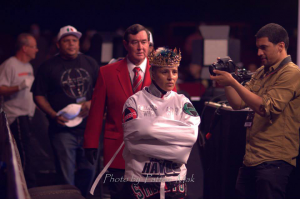