by Peter Knox
in Cage Warriors
3

Local boys Chris Fishgold and Lee Chadwick were victorious on a big night for Liverpool at The Echo Arena at Cage Warriors 88. 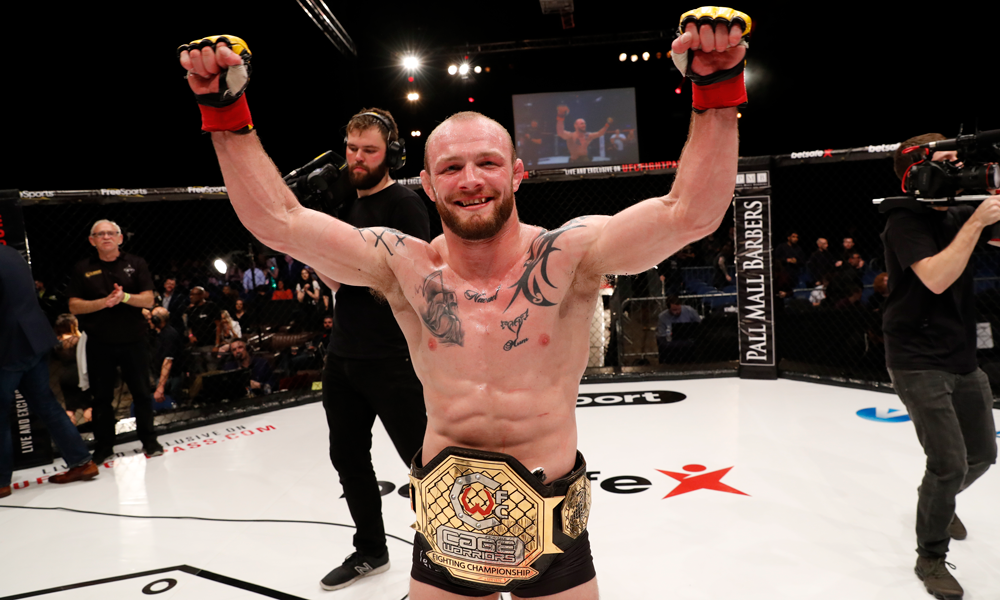 Chris Fishgold submitted Alexander Jacobsen inside a round to win the Cage Warriors lightweight title outright, then announced he’s setting his sights on the featherweight belt. Fishgold showcased his skills for all to see as he put away top contender Jacobsen in decisive fashion to retain his lightweight title for a third straight time at Cage Warriors 88 in Liverpool.

The fight was thought to be a striker versus grappler matchup, with Norway’s Jacobsen expected to come forward throwing strikes, but it was Fishgold who dominated the stand-up exchanges from the off, backing up the bigger man with powerful shots.

And when the fight went to the mat, Fishgold’s dominance was even more stark, as he quickly worked to the Norwegian’s back and forced the submission via rear-naked choke.

“It’s been a long time coming. I hope I put on a show for you tonight,” he said to the Liverpool crowd, before making a surprise announcement about his fighting future. “I wasn’t actually going to tell anybody yet, but this is going to be my last fight at lightweight,” he revealed. “I’m gonna drop to featherweight. You can see I’m quite small at the weight so it’s about time I go down. “Not in a disrespectful way, Nad. You’re a good friend of mine, I like you. I think you’re very skilled but it’s just business. I’d like to fight Nad for the featherweight title. He took it in Liverpool. I’d like to take it in his home town.”

In the night’s co-main event Liverpool’s Lee ‘The Butcher’ Chadwick overcame an early deficit to outpoint Sweden’s Victor Cheng and capture the vacant Cage Warriors middleweight title. A very cagey opening round saw Cheng work behind his kicks for much of the frame, while Chadwick held a watching brief, trying to work out the Swede’s timing. The second followed a similar pattern before Chadwick looked to impose his wrestling and top game in the third, pinning Cheng up against the fence and working for a submission. 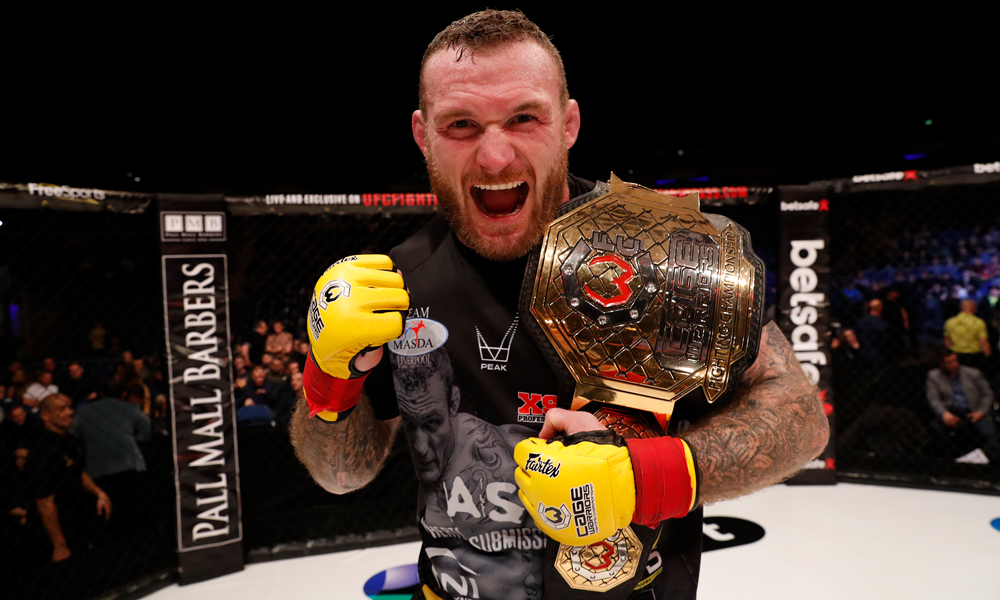 When the opportunity came, ‘The Butcher’ locked up a tight standing guillotine, but Cheng managed to defend until the Brit finally relented and released the hold. As the pace started to drop in the fourth Chadwick started to find success on his feet as the pair engaged in a much closer round to call. Possibly concerned his opponent had brought the fight level, Cheng came out swinging at the start of the final round and ended up in top position on the mat.  But Chadwick reversed position and dominated the remainder of the round as the fight went all the way to the scorecards.

And when the scores were totalled all three judges were in agreement, as Liverpool’s Chadwick picked up the victory, with scores of 48-47 across the board.

Also on the main card, Norway’s ‘True Viking’ Soren Bak produced a superb display of grappling to wear down Martin Stapleton and submit the Royal Marine via rear-naked choke late in the opening round of their lightweight contest. he fight went to the mat almost immediately, with the pair engaging in an early scramble that would set the tone for the contest. Bak eventually took the dominant position and gradually worked his way towards Stapleton’s back before eventually locking up a rear-naked choke for the win.

Liverpool’s Molly McCann called for a title shot after producing another all-action performance to defeat experienced Brazilian Priscila de Souza in the opening main card bout of the night. The flyweight fight started with a crazy opening round, as de Souza scored a couple of takedowns, while McCann unloaded a barrage of heavy-handed strikes. The second round was equally frantic, as McCann started to take control of the contest. The Evertonian turned up the heat with her strikes, while doing a much better job of fending off the Brazilian’s takedown attempts. And, after a warm embrace at the start of the third, both fighters left it all in the cage in the third and final around as the bout went all the way to the scorecards.

The judges were all in agreement on the winner, as McCann took the fight via unanimous decision with scores of 29-27, 29-27, 29-28, then called for a shot at the title when Cage Warriors returns to Liverpool in February next year.
CAGE WARRIORS 88: RESULTS

Paull McBain def Sam Spencer via TKO (doctor stoppage due to a cut), end of Round 1