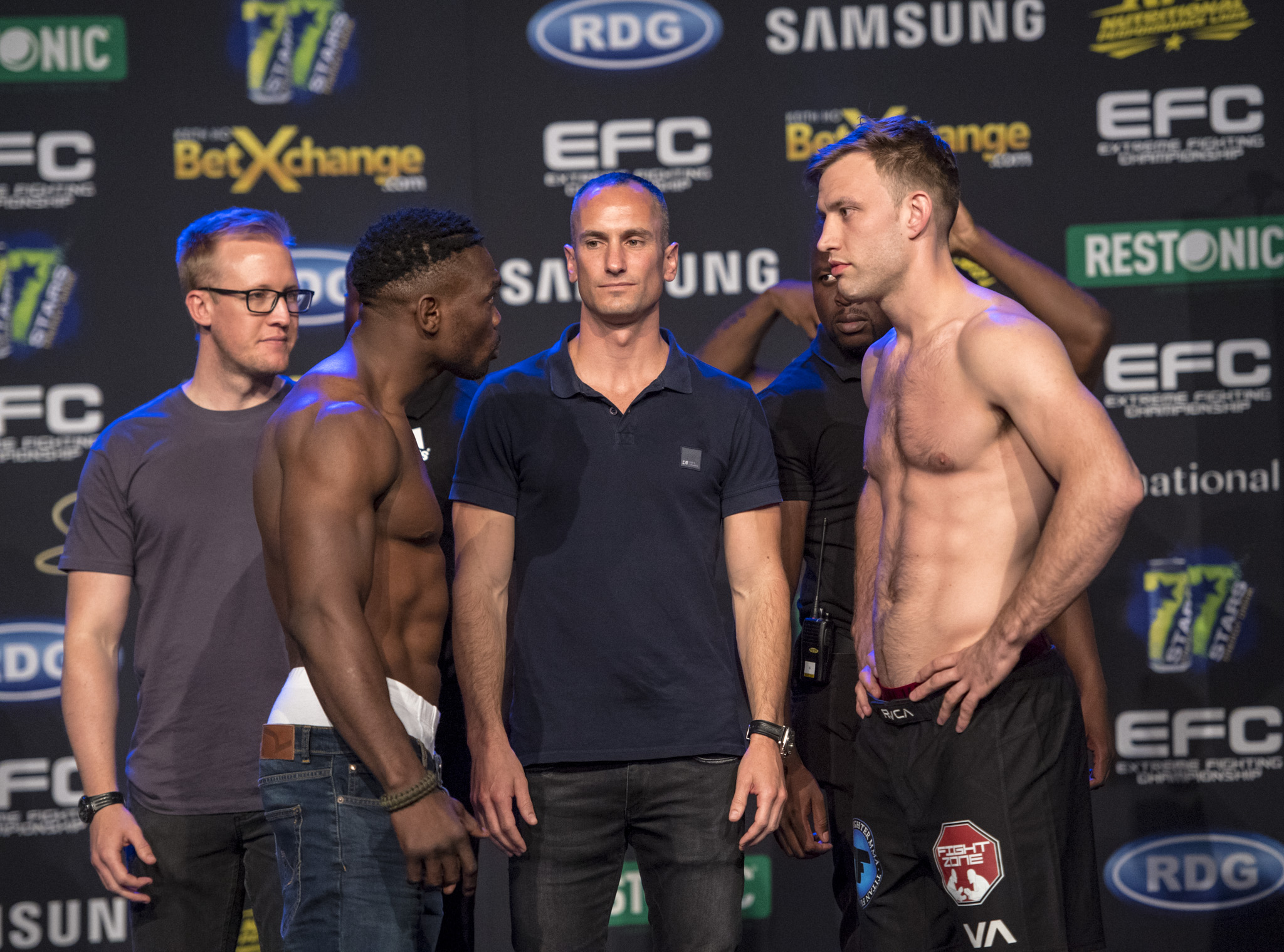 “EITHER I FINISH HIM, OR HE QUITS”

Despite 20 other combatants hitting the scale and performing face-off duties, it was when the champion entered the arena that the crowd rose to their feet.

As always, Dalcha’s Congolese fan-base was intense in their support, elevating the champion with the chanting of war songs.

Austin continued in the same vein, grabbing the mic from commentator Cyrus Fees to respond directly to the taunting fans, reminding all that he ended his previous fight against African boxing champion Elvis Moyo untouched.

“I’m finishing this fight, no problem,” an irritated Austin said to Fees and to the crowd. “Either I finish him, or he quits.”

“I am fighting for my Africa. I will do my talking in the cage,” responded the Champion, to roars from the crowd.

Just preceding the main event is the bout between Johannesburg’s Boyd Allen and Scotland’s Callum Murrie. Allen makes his return to the EFC Hexagon after nearly a year’s absence. The support he enjoyed was similar to the champ’s, while his Scottish rival felt the heat of the outsider.

“There’s no need for boos,” said Allen. “Calum’s a worthy opponent, and he’s travelled far to be here.”

With the top four fights featuring African talent against warriors from across the globe, including South Africa’s Bruning vs England’s Hughes, Johannesburg’s faithful were unbending in their support of their local heroes.

Sitting second on tomorrow night’s main card, Johannesburg’s Bokang Masunyane takes on Brazil’s Magno Alves. The heat between the two was such that they had to be separated by security, invoking an explosive bout tomorrow night.

Opening the main card is the heavyweight thriller between Zimbabwe’s Elvis Moyo and the Cameroon’s Nico Yamdjie. Both giants were all smiles as they greeted each other after the scale, shaking hands packed with the raw power that makes a heavyweight bout riveting – one punch to end it all.

EFC matchmaker Graeme Cartmell shone the torch on the prelim card also, reminding fans to watch out for the coming war between Cape Town’s Faeez Jacobs and Johannesburg’s Oumpie Sebeko, a definite fight of the night possibility. Sebeko failed to make weight, now fighting at an agreed weight marker with Faeez’s camp, adding further fuel to the fight.

The official EFC 65 weights are as follows: