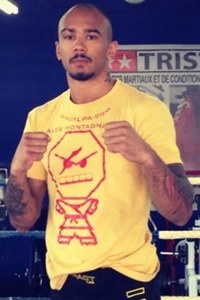 When the cage door closes, a fighter’s overall demeanor can be vastly impacted after a long layoff.  In today’s episode of Across The Pond, you will meet a Middleweight mauler looking to channel his thunderous aggression in hopes of reaching the top of BAMMA’S murderous Middleweight division. A professional since June 2011 and representing Team Mean MMA in London, Alex Montagnani owns a 10-2 -1 record in twelve career bouts consisting of eight knockouts, one decision and one submission.

Alex defeated Brad Watchorn via TKO in the second round. He won his next four contests which included wins over Liam Bird and Steve McDonald respectively. In his BAMMA debut at BAMMA 15, Alex submitted Nathan Jones via rear naked choke in the first round. He knocked out Tim Menzies in round one via flying knee at BAMMA Fight Night. At Celtic Gladiator 12, Alex defeated Shawn Lomas via unanimous decision. Alex returned to BAMMA to face Martin Hudson at BAMMA 31 in London and defeated him via TKO in the first round. He followed this up with a victory over Ivan Golod at Celtic Gladiator 14. When Alex flips the switch, you are in for a world of of hurt!

Interview with Alex done by Mick Kane of MMA UK-

MMAUK: You last fought last month at Celtic Gladiator 14 against Ivan Golod, winning in first round by UK. Did the fight go as you expected?

AM: Yeah the fight did go as expected, I got the W and did what I had to do.

MMAUK: You are on a 3 fight win streak since returning to the sport after a 2 year break. I believe you were injured during this period. You are certainly making up for lost time. Do you feel you are back to your best after injury?

AM: Yes, with 3 wins under my belt I feel like I’m back on top form and ready for the next challenge.

MMAUK: When did you first get involved in MMA? Did you start out in traditional martial arts?

AM: I got involved in MMA around the age of 22/23, but I had a background in Judo in which I’ve been doing since a young age.

MMAUK: When are we likely to see you back in the cage?

AM: Hopefully over the next couple of months and hopefully on BAMMA.

MMAUK: What’s your goals within the sport?

AM: My goals are to get to the top of the pile and be known as one of the best fighters of all time.

MMAUK: You also do some acting, tell us how you got involved in this, does being an MMA fighter help in any way, going for roles?

AM: Yeah I do act as well, I got into it from MMA as there was a casting for a MMA based film of which I got the role then more roles started coming in. Yeah it can help in certain roles as the fight experience can play a part in on you being cast or not.