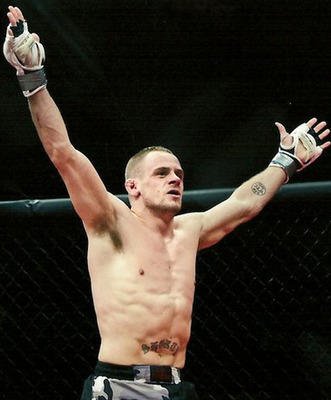 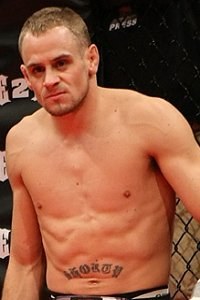 New Jersey is known for producing fighters with grit and tenacity such as UFC veterans Dan Miller and Nick Catone. In today’s episode of Across The Pond, you will meet a eastern submission specialist whose showcase of jersey toughness makes him one of New Jersey’s most accomplished Flyweights. A professional since November 2008 and representing Miller Brothers MMA, Sean Santella owns a 18-6-1 record in 24 career bouts consisting of thirteen submissions, five decisions one draw and one no contest. Sean has fought for various promotions in the Eastern United States including Ring Of Combat.

At Downtown Beatdown, Sean submitted Brock Menzil via triangle choke. He tapped out his next five opponents which included wins over Ricky Garnett and Bret Thomas respectively. At Ring Of Combat 33, Sean submitted Mikey Lovato in the second round via armbar. He defeated his next two opponents via decision in Tito Jones and Sidemar Honorio respectively. Sean won his next five contests which included wins over Dave Morgan and Bryan Lashomb respectively. At Ring Of Combat 53, he defeated Jay Pressley in the first round via rear naked choke. Sean defeated Andrew Cseh via unanimous decision at CFFC 56. He submitted Matthew Lozono in round three via rear naked choke at CFFC 62. Sean also tapped out Lawrence DiGiulio in the first round via triangle choke. At PA Cage Fight 29, he submitted Nate Williams in round three via rear naked choke. At CFFC 69 on December 16 Sean will face Kevin Gray for the CFFC Flyweight title. Good luck Sean!

Interview with Sean done by Mick Kane of MMA UK-

MMAUK: You last fought in September for the PA Cage Fighting vacant title in which you defeated Nate Williams. Did the fight play out as you expected?

SS: Hey what’s up guys yeah my last fight was PA cage fight back in September where I submitted Nate Williams with a third round rear naked choke the fight pretty much went as planned. I dropped him a couple times throughout the fight and I feel like I was winning every aspect of the fight, eventually I was able to get to his back and lock in a body triangle then sink in the submission. I almost had him finished with an armbar in the first but Nate’s a tough dude and he was going to let his arm break before he tapped out so Props to him. I was having a hard time finding a fight so I was happy that somebody would step up in my opinion it didn’t really do anything for me because I wanted to get a little more of a well-known opponent to try to get that next step of possibly getting into the UFC or bigger promotion so I was trying to get a bigger name but all the bigger names are either signed or they’re scared they don’t want to get a loss to set them back so they’re taking the safer fights and Nate stepped up.

MMAUK: How did it feel to win the belt?

SS: Honestly the belts just a belt I won I think 9 titles as a pro so to me if I don’t get to the big stage they all really don’t mean anything to me.

MMAUK: You have fought and won for several titles for various promotions. What title win holds the best memories?

SS: I’d say my CFFC flyweight title probably means the most because I defended it several times and CFFC was able to find people to defend the title against and other organizations have a hard time after I win finding me fights.

MMAUK: You have been a bit of a submission expert, do you come from a grappling background? Is that how you ended up involved in MMA?

SS: I wrestled in high school in New Jersey and New Jersey is known as a tough wrestling state. When I first started doing Jiu-Jitsu I just seem to pick it up very well and pretty quick and I was comfortable being on my back so it’s a little odd that a wrestler would be comfortable off his back and that’s pretty much been my style. My style is a very aggressive guard game. I never really thought of Jiu Jitsu and fighting as a career but when I started training and putting in a hundred percent I realised I wasn’t that bad at it, that and the fact that I wasn’t any good at anything else helped out as well haha. It’s probably the only thing in my life that I’ve actually taken serious and dedicated myself to.

MMAUK: Do you have anything you regret about your career?

SS: I’d say the only thing I regret is going professional too soon there wasn’t a lot of amateur promotions back when I first started but I wish I took a couple more fights to work on my striking before I went pro.

MMAUK: What do you still hope to achieve within the sport?

SS: In my opinion the only thing left for me to achieve is to get into that Big Show and make some noise and win some fights possibly get a chance at the title. I know on any given day I could beat anybody in the division. Flyweights beware!!!