by Kayla Baity
in UFC
2

As the year wraps up we reflect on the standout athletes and their performances in 2017. These mixed martial artists executed moments that had the MMA community going wild and anticipating what’s next for them in the new year. 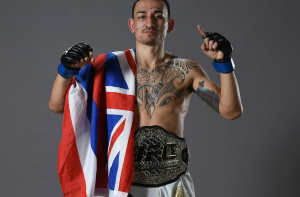 Max Holloway introduced us to the “blessed era” defeating former reigning champion Jose Aldo on June 3rd, 2017.Following his victory, he looked to make his first title defense before the year was over.The Champ runs with the mindset of fighting whoever the UFC throws at him. Referencing his opponents to “cupcakes” and stating that he’s ready to try every flavor.UFC 218 provided him a familiar taste when he faced Jose Aldo for the second time(Frankie Edgar pulled out with injury)because Holloway felt the fans and city of Detroit deserved a great fight he knew he would provide.With the recent trend of champions avoiding favored title defenses, Max’s any kine mentality is something to respect as he creates his legacy as champ. 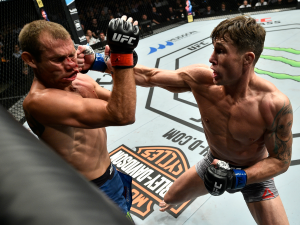 Young Welterweight Darren Till faced Donald Cerrone in what critics thought would be “Cowboy”s comeback fight. A composed and confident Till smashed those plans with a first round KO (performance of the night) immediately creating hype and pushing him up to #7 in rankings. A pro since 2013, Till is only 24 years old and has stayed active since joining the UFC roster.After his commanding performance fans and Till have run wild with possibilities of who he will face next in his stacked division.“Next year, whether it be March or what in London, I’d like the UFC to just give me the hardest fights in the welterweight division. People say that I’m just striker, but if you see my come up against a grappler, you are going to see my grappling skills. I shrugged off Donald Cerrone’s takedowns off like they were nothing. I’m pretty sure I’m going to do that with another high level grappler. I’m not scared of anyone. Anyone in the top-10 or anyone even outside of the top-10.” – Darren Till on the MMA Jim podcast.

After waiting on the sidelines due to injury Cynthia Calvillo jumped into 2017 and went on a run. She made her UFC debut against Amanda Cooper in March and will compete four times this year finishing with a spot on the December 31st card UFC 219. Calvillo has shown her passion taking last-minute fights and upgrades to the main card delivering exciting performances with equanimity. Calvillo now ranked #6 in the Strawweight division faces veteran Carla Esparza and with a fourth straight win, a title fight could be proposed for her in 2018. 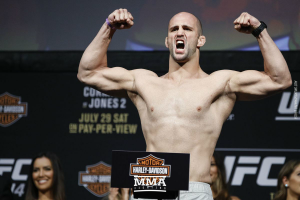 Start your UFC career by taking out three top 10 guys in the Light Heavyweight division and you get yourself a title shot against Daniel Cormier in January 2018, or at least that’s how Volkan Oezdemir does it. Some argue that good timing during confusion in the division helped Oezdemir get his shot at gold but maybe they need to check out his knockout reel.Volkan is a breath of fresh air that excites fans and D.C. enough to join the anticipated UFC 220 card in Boston, MA. 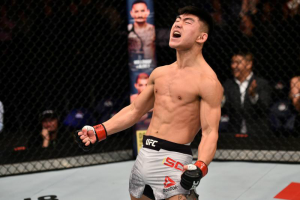 Song Yadong, the new MMA? UFC Shanghai was an opportunity to make a statement and 20-year-old Yadong did that with a performance of the night win taking the fight on a few weeks notice.Song a pro since 2013 with fifteen fights on his record showed composure and a well-rounded skill set representing his country as a Featherweight prospect.