Are We About To See CM Punk Return To The UFC?

We may be about to discover if former WWE star Phil “CM Punk” Brooks has any sort of future in the UFC.

During the broadcast for UFC Belem, the UFC announced details for UFC 224 and 225. UFC 224 will take place in Rio De Janeiro, Brazil on May 12th and 225 will take place at the United Center in Chicago on June 9th.

Immediately following the announcement, rumours began to circulate that Chicago native CM Punk might be in consideration for a spot on the UFC 225 card.

Brooks hasn’t fought since making his disastrous debut back at UFC 203 in September 2016. Retired wrestler Punk was quickly submitted by welterweight prospect Mickey Gall without landing a single significant strike. 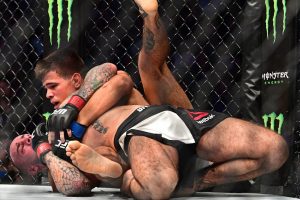 Many felt that was it for Brooks. One and done. He does however remain under UFC contract and it would be no surprise to see him booked for the first PPV event to take place in his home city. Speaking to the Associated Press, UFC president Dana White recently confirmed he would be prepared to give Brooks a chance at redemption.

“I like that guy. He’s a good dude,” White said of Punk. “He wants to give it another shot. I’m going to give it to him.”

Opinion among fans is split as to whether there is an appetite to see him return following his unfortunate debut. I don’t think it’s unfair to say the majority of fans have little interest in finding out if he has improved. Assuming Punk has learnt from his mistakes, you would expect him to have spent every day since that embarrassing defeat in the gym working on his game. Making sure he is ready for his next opportunity. I would hope to see a very different CM Punk should he be booked to fight again.

As for who his opponent should be, I feel he would be well matched against Bobby Nash. Nash is on a 3 fight losing streak and holds a professional record of 8 wins and 4 losses. Nash made his UFC debut in January 2017 and has suffered 3 consecutive KO losses in that time. Given Punk’s lack of professional experience it makes sense to match him up against someone with a relatively low amount of professional fights. It also makes sense that he should square off against someone on a losing streak. For me, Nash ticks all of those boxes.

I suggested the possibility of fighting Brooks to Nash and it seems he agreed that it would be a good match up for them both.

I think that would be a good fight considering I've taken a few losses and CM punk has lost. He needs to fight someone like me and obviously I would take it.

Exactly I need to get back on the win Colum and he needs to fight a guy who is on a losing streak because he shouldn't be fighting on top level guy. It makes sense. Who knows though.

On a side note, I think it’s important to appreciate the courage it takes for anyone to step inside a cage and fight. No, Brooks didn’t exactly cover himself in glory at his first attempt. He did make the attempt though. He showed up, on the biggest stage there is and stepped in there with a dangerous individual. No matter what you think of his performance, he deserves respect for doing what many say they would but few actually do.

Time will tell if he will be booked to fight again. If he is, we will all find out if he has used this time off wisely.

Ronda Rousey: Time to give her a break