Conor McGregor and Floyd Mayweather are on the brink of agreeing terms for a rematch, this time in the octagon.

In a move likely to divide fan opinion worldwide, McGregor vs Mayweather 2 is set to take place under MMA rules according to TalkSport.

Boxing expert Gareth A Davis confirmed today that talks are under way between the two fighters to iron out the details. Speaking to Talksport, Davis said:

“Conor McGregor had no chance in a boxing match with Floyd Mayweather. People will tune in to see Mayweather get stopped by Conor McGregor and it won’t affect his boxing record. I think it’s going to happen and I think it will be a three, four, five hundred million dollar fight again.”

Last August, UFC lightweight champion McGregor fought Mayweather in a boxing match watched by millions around the world. The fight delivered hundreds of millions of dollars in pay for each fighter while simultaneously holding up the UFC lightweight division for over a year. While it ended in defeat for McGregor, there were no real losers. At least not financially. 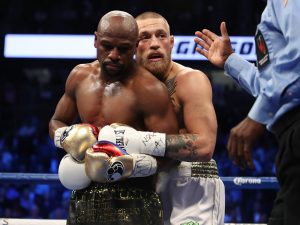 If as expected, McGregor is stripped of his lightweight title in the coming months, it would free him up to take any fight he pleases. I expect the prospect of meeting Mayweather in an MMA fight would please him very much.

The main issue I have with this fight stems from those involved convincing people to buy the event. The first time the fighters met, McGregor and his team worked extremely hard to build up the idea that Conor’s punching power might be too much for the 50-0 boxer. This time out, Mayweather has to try and convince people that he is capable of beating the noisy Irishman at his own game. That is a tough sell by anyone’s measure.

Surely nobody can expect any outcome other than a dominant McGregor victory.

The first fight was widely recognised by most as a cleverly orchestrated money grab by both parties. In that regard, it was wildly successful. This is no different. Both men love money, that is no secret. This is the easiest possible nights work for the Irishman, for the maximum amount of financial reward.

We can all look forward to months of back and forth between the fighters with them once again working to convince us that they hate each other. If nothing else, perhaps it will open up the sport of MMA to some new fans.

Both fighters are disliked and loved by fans in equal measure. That will likely be enough to convince fans to tune in for yet another circus like PPV event in the hope that either McGregor is embarrassed or Mayweather finally KO’d.

While I may regret saying this, let us know your thoughts in the comments.

Bisping Open To The Machida Challenge