After A Huge Win for Yoel Romero, What’s Next For UFC 221’s Winners?

UFC 221 was certainly more entertaining than most would have expected leading up to the event. On the main card, only one local favourite failed to walk away with the win. There were big wins for prospects Tyson Pedro and Tai Tuivasa. A smart display of the fight IQ of Curtis Blaydes. A three round battle in the welterweight division with Jake Matthews emerging victorious. Not to mention an outrageously brutal finish in the main event which saw Yoel Romero *not* crowned the interim middleweight champion.

Let’s take a look at who the winners on the main card should be matched up against next. 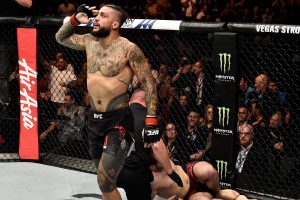 Charismatic 26-year-old Pedro improves his record to 7-1, following his first-round submission of Saparbek Safarov. All seven of his professional wins have come inside the first round. With this win, Pedro has improved to number 12 in the UFC light heavyweight rankings.

For his next challenge, Pedro should be looking up the rankings again. With most of those immediately ranked above him already booked, I’d like to see him given an opportunity to really show just how much he learned from his unanimous decision loss to Ilir Latifi last September.

This may be too much too soon but a fight with Mauricio ‘Shogun’ Rua would be an interesting challenge. While the former champion hasn’t fought since March last year, he currently holds the number six spot in the UFC light heavyweight rankings. For Shogun, a win would prove that the former champion still has something to offer. For Pedro, a win would catapult him up the rankings and truly announce him as a contender in the light heavyweight division. 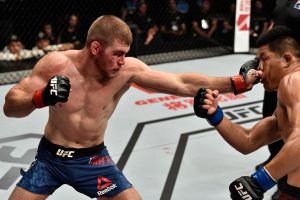 In one of my favourite performances of the evening, Jake Matthews beat down Li Jingliang over the course of 3 rounds to earn a decision win. Perhaps the biggest talking point of the fight was the outrageous eye gouge Matthews received while attempting to finish Li with a guillotine in the second round. The 23-year old Aussie showed great composure in putting that to one side and continuing to dominate the fight right to the very end.

It was an impressive performance by Matthews and one which should be rewarded with a step up in opponent in his next fight. Belal Muhammad would be an interesting matchup for the young Australian.

Muhammad is 13-2 and is on a 3 fight win streak following a split decision win over Tim Means last November. While Muhammad would be a significant step up for Matthews, he is showing all the signs of being ready for the challenge. 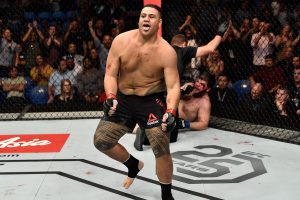 At just 24-years old, Tai ‘Bam Bam’ Tuivasa is already making waves in the UFC heavyweight division. He has just 7 professional fights and every one of those has ended via KO. All in the first round. While I’m not quite ready for the UFC to push him to Ngannou levels of hype just yet, he undeniably has a bright future. I’d like to see Tuivasa tested against a ranked opponent in his next fight. Following his destruction of Cyril Asker, Tuivasa has debuted at number 15 in the heavyweight rankings.

Experienced 26-year old Junior Albini (14-3-0) is coming off a loss to veteran heavyweight Andrei Arlovski which ended his own 10 fight win streak and is currently ranked a number 14 in the division. He too has heavy hands but also a strong submission game and would present a new challenge to Tuivasa. Albini would be a test that should the Australian be able to pass successfully, he would secure himself an improved spot in the UFC heavyweight rankings. 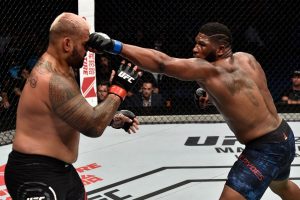 In an intelligent display against veteran knockout artist Mark Hunt, Blaydes secured an impressive decision victory. After being rocked in round 1, Blaydes switched things up and finished the fight with 10 successful takedowns against the durable and experienced Hunt. As expected, Blaydes has climbed 4 places in the UFC heavyweight rankings and now occupies the number 5 spot.

There are a number of options open to Blaydes following his big win. Alistair Overeem would provide a stiff test for the Chicago native. Similar to Hunt, Overeem is a dangerous kickboxer with decades of fight experience. Unlike Hunt though, he has won 43 of his 59 MMA bouts with his two most recent losses coming against the champ Stipe Miocic and title challenger Francis Ngannou. Overeem is an extremely dangerous opponent and would provide Blaydes with the chance to establish himself within the top 5 of the heavyweight division. A victory against Overeem would transition Blaydes from prospect to genuine contender. 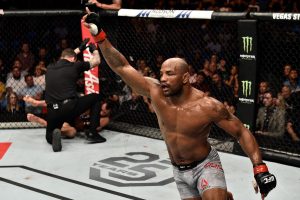 After his brutal KO victory against Luke Rockhold, Yoel Romero has positioned himself perfectly for a second shot at Robert Whittaker. Stepping in on short notice, Romero made the most of the opportunity presented him and delivered a stunning finish in the third round. Yes, he fought Whittaker relatively recently. Yes, he lost that fight. No, he’s not the interim champion. But he is, without doubt, the number 1 contender for the middleweight crown. His next fight has to be against Whittaker. I’m certain Romero will have learned a great deal from what is his only loss in 10 UFC fights. He knows now that there is little point wasting energy trying to suffocate Whittaker with takedown attempts.

Putting the failed weight cut to one side, there has never been a better chance for 40-year old Romero to finally get his hands on the UFC middleweight belt. His coach confirmed that there is no serious damage to his leg following his trip to the hospital. Assuming Whittaker is back to full strength soon – this is the fight to make.

Let me know what you think of the matchups in the comments and for more MMA content you can find me on Twitter @tommymull_mma.