Israel Adesanya – The Future of the UFC Middleweight Division

by Tom Mulligan
in UFC
32

A number of up and coming fighters found themselves in the spotlight at UFC 221, perhaps none more so than Israel “The Last Stylebender” Adesanya.

The flashy 28-year old middleweight holds a perfect professional MMA record of 12-0-0 and looks set to provide a much-needed breath of fresh air in an ageing UFC middleweight division where the average age of the top 15 is a little under 34-years old. With the likes of Michael Bisping, Vitor Belfort and Lyoto Machida approaching the end of their storied careers, the division is crying out for fresh talent to take up the mantle. Based on what we have seen so far, Adesanya may just be the man to do it. 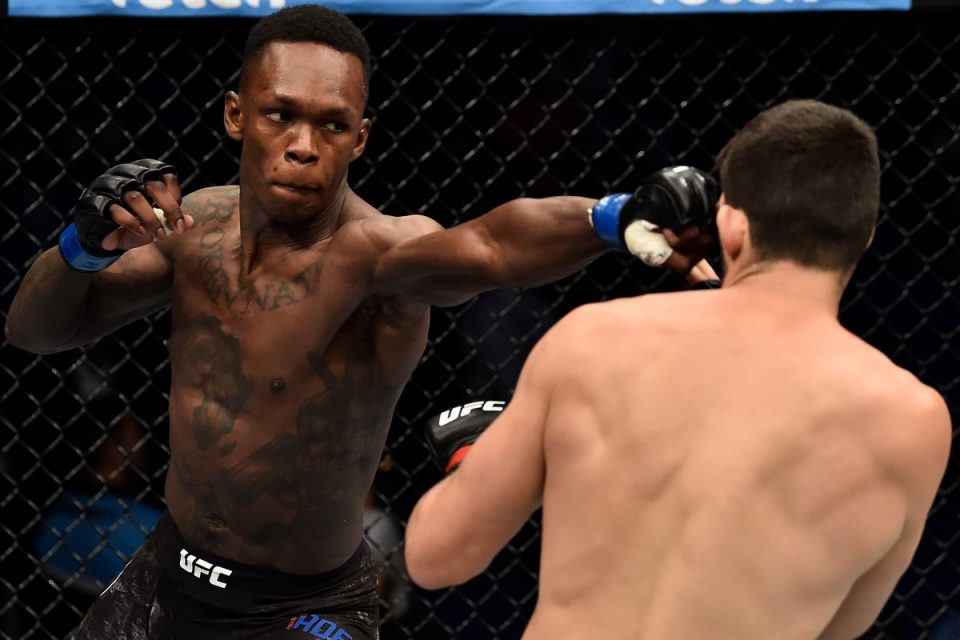 I know he has only fought once in the UFC but there are reasons to be excited about Adesanya. Did I mention that all 12 of his wins have been KO/TKO stoppages? Or that he’s never seen the third round of a professional MMA fight? Or that he’s had 57 professional kickboxing fights to go with his 12 professional MMA bouts. Not to mention his 5-1 professional boxing record. Adesanya is experienced in the fight game.

Making his UFC debut at UFC 221, Adesanya was matched against Rob Wilkinson (11-2-0) and never truly looked troubled. It was a little over 3 and a half minutes into the second round when the referee stepped in to prevent Wilkinson from absorbing any more punishment. The way “Stylebender” handled Wilkinson was impressive enough to earn him a performance of the night bonus. It was his post-fight interview however which really caught the imagination of the fanbase.

When asked by Jon Anik who he would like to face next, Adesanya kept it simple.

“Middleweights, I’m the new dog in the yard and I just pissed all over this cage”

We live in a world where it is the norm for fighters to take to social media to call out each other with increasing regularity. It’s telling that in a week or so since Adesanya effectively called out the entire middleweight division, nobody has publicly answered his call. Ordinarily, there would be a queue of fighters looking to put a loud, confident newcomer in ‘their place’. Not this time. The middleweight division has been remarkably quiet. 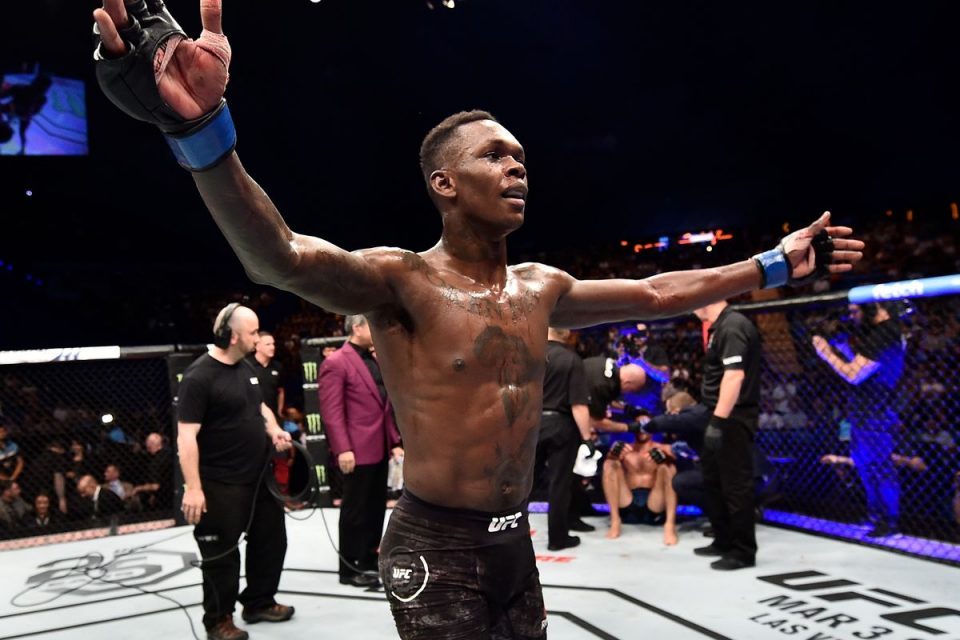 Speaking with Ariel Helwani on the MMA hour yesterday, Adesanya gave himself a C- for his performance.

“Yeah C-, there’s a lot of things cooking, we’re not done yet. This is only the tip. Soon we’re gonna stick the whole thing in”

Asked about who he’d like to fight next, Adesanya didn’t commit to naming any fighter in particular but was confident that he would be fighting again soon. He did, however, say he was ready to go again right away should the UFC need him.

There are a number of options available for Adesanya and the UFC. All too frequently we have seen fighters emerge with a flash and a huge amount of promise, only to be pushed too far too soon and fall victim to the UFC’s desire to create the next big star. A fighter as accomplished and confident as Adesanya is certainly a candidate to be given a big push by the UFC. Fans have seen this happen a number of times before. It doesn’t always go well.

Fighters like Sage Northcutt, Paige Van Zant and more recently, Francis Ngannou have all been given big pushes by the UFC based on the early promise. All have since found themselves facing setbacks which arguably, would not have happened had they been given a more patient promotional approach.

With all due respect, Israel Adesanya is not Sage Northcutt or Francis Ngannou. He is an extremely accomplished fighter away from the UFC. He has fought professionally in both Boxing and Kickboxing, including fighting under the Glory banner. Any fighter who has taken part in a total of 75 professional fights across different disciplines is unlikely to find himself intimidated by the bright lights and big tests of the UFC.

That level of experience will be invaluable when it comes to taking the leap from the prelims toward the top end of a fight card. 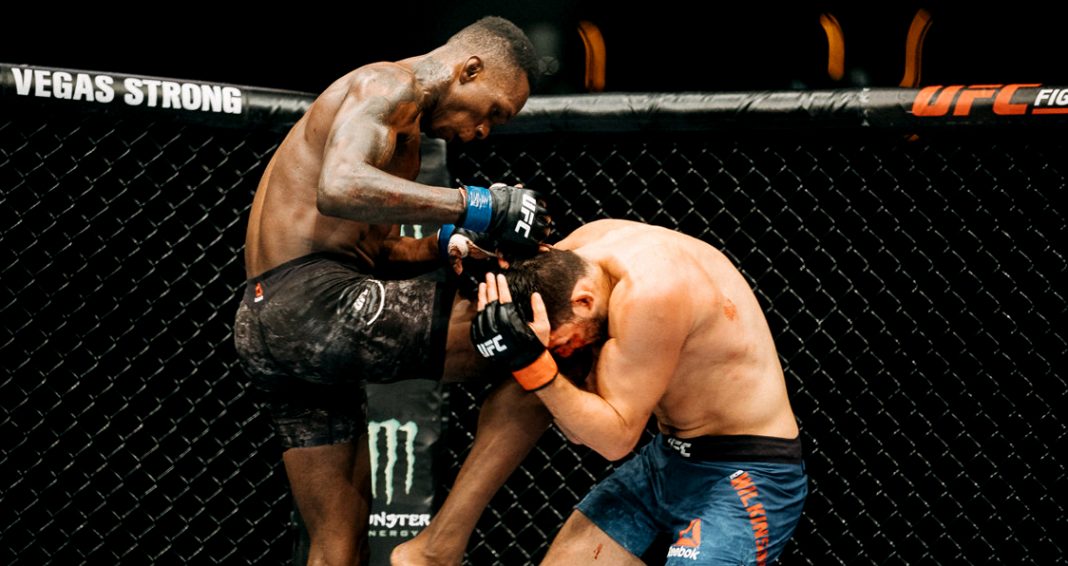 Comparisons have been made to the similarly tall, talented, charismatic and flashy Jon Jones. Unsurprisingly, Adesanya isn’t a fan of these comparisons. He isn’t the next Jon Jones, he’s the first Israel Adesanya.

“I don’t like being compared to anyone. People are like ‘it’s a compliment’. ‘It’s like the old Jon Jones’. Don’t disrespect me, don’t disrespect him. We’re two different people.”

“I’m on my own path, I’m carving my own legacy. So I don’t want to be compared to anyone. Not Conor Mcgregor, not Anderson Silva, not Jon Jones. Even though I look up to those guys, I’ve looked up to those guys. I’m a different breed..you’ll see.”

Adesanya oozes confidence. Just listening to him talk you can’t help but buy what he’s selling. He strongly believes that he is the future of this division and it’s easy to see why.

What does the future hold?

When asked about his middleweight title aspirations, Adesanya was candid about when he believes he’ll get his chance.

“Probably next year I’m gonna say. I don’t know why, I keep getting this strong feeling it’ll be me and Robert . If Robert can hang on to the belt it’ll be me and him, Spark Arena. I just feel it.”

“I’ve seen it. I can see it happening at the end of next year.”

With his talent, fight experience and charisma, it’s hard to see a path for Adesanya which doesn’t lead to a title fight within the next two years.

There will be a lot of work to do along the way but the UFC middleweight division is his for the taking should he want it. It’s safe to say, yes, Israel Adesanya wants it.