Ovince Saint Preux vs. Ilir Latifi: What will go down?

A rescheduled Light Heavyweight meeting between former Interim title championship contender Ovince Saint Preux and Swedish powerhouse Ilir Latifi finds it’s way onto the main card of UFC on Fox 28 in Orlando, with the victor certainly catapulting himself into title contention, especially with current division king Daniel Cormier attempting to dethrone Stipe Miocic for the Heavyweight crown. Looking to extend his win streak to four, OSP recorded a highlight reel high kick knockout win over Corey Anderson last time out, while explosive wrestler Latifi picked up a unanimous decision win over Tyson Pedro back at UFC 215. This pairing was slated for UFC on Fox 27 in Charlotte until an injury to ‘The Sledgehammer’ Latifi forced him from the contest.

Knoxville native Saint Preux certainly has seen light after his three-fight slide, claiming three impressive stoppages on the trot, firstly Marcos Rogério de Lima with a Von Flue choke, Yushin Okami with the same method and the previously mentioned Anderson, this time an expertly timed switch high kick, flatlining the young grappler. Suffering a broken forearm in the second round against the currently suspended and investigated Jon Jones in a five-round beating, OSP continued his disappointing slide with a devastating defeat to Jimi Manuwa at UFC 204 before another loss to recent title tilt Volkan Oezdemir, this time a close decision to his bout with ‘Bones’ Jones. 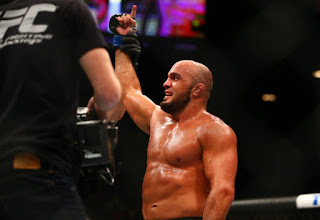 With some dangerous hands and accomplished wrestling, Sweden’s Ilir Latifi is a dangerous customer for any top ten 205lber in the UFC today. Before his dominant win over Pedro, Latifi faced current Bellator Light Heavyweight kingpin Ryan ‘Darth’ Bader, with a level change from the Malmo native read emphatically with a knee, rendering him unconscious, and his three-fight rise dead in the water. Hans Stringer and Sean O’Connell both fell to Latifi via strikes before a Gian Villante match-up seen Latifi pick up another win, this time a decision victory.

In my opinion, the striking of Saint Preux, especially that quick left body kick and mixed high kick will cause Ilir huge problems, and his explosive and athletic frame will see him through any clinch or grappling exchanges.