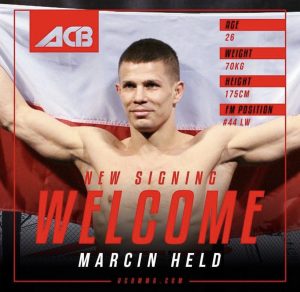 Held, hailing from Poland, was long credited as one of the best fighters outside of the UFC. With wins over names like Borys Mankowski, Artur Sowinski, Phillipe Nover, Derek Anderson, Rich Clementi, Alexander Sarnavskiy and perhaps most impressively Patricky ‘Pitbull’ Freire, it doesn’t take much to see why The Polish Prodigy was held in such high regard.

On August 30, 2016, Held had finally signed with the top promotion, leaving Bellator amidst some controversy as to whether or not the released him, or he terminated his own contract. None the less, Held was welcomed to the promotion by UFC legend Diego Sanchez. Despite most feeling that Marcin had done more than enough to win, Sanchez was given the nod by the judges. A split decision loss to Joe Lauzon followed, and Held had dropped 3 in a row when he was caught by a blind knee after winning two rounds against Damir Hadzovic.

Held’s final UFC fight came against Nasrat Haqparast, a unanimous decision win. It’s this victory that makes his exit from the promotion specifically notable, but none the less Held now finds himself signed with ACB in the Lightweight division, undoubtedly keeping his eyes glued to the ACB 86 title fight between the only champion in the promotion’s history Abdul-Aziz Abdulavakhabov, and his challenger Ustarmagomedov Gadzhidaudov, two names I was able to spell off the top and totally didn’t need to Google. 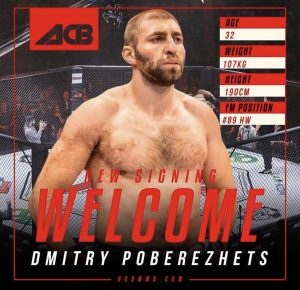 Poberezhets signed with UFC in 2017, is lined up with Jarjis Danho. After Danho pulled out due to injury, Poberezhets was linked with both Chase Sherman and Mark Godbeer at future events, both of which saw Poberezhets pull out due to injuries of his own. Seemingly tired of waiting for his debut, UFC cut Dmitry Poberezhets along with a string of other fighters in February, and it hasn’t taken him long to take his 14 fight win streak and find a new home. 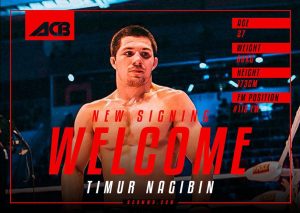 Timur Nagibin is a specifically interesting acquisition, as the Featherweight has been a staple of the M-1 Challenge roster since 2016. Nagibin has a 5-2 record for the promotion and leaves after an absolutely brutal performance where he destroyed Jadison Costa.

All 3 signings are fantastic pickups for ACB, and we’ll keep you posted when each gets their first fight announcements.

Darren Till tells Mayweather to 'wake up'