Opponents confirmed for Dalby and Bergh at CW93 in Sweden

by Frankie Anderson
in Cage Warriors
2

Cage Warriors, Europe’s leading MMA promotion, have promised big things when they return to Scandinavia on April 28th for CW93, riding the momentum built by a run of incredible shows in 2018. The event will be a historic night for mixed martial arts in the region, with Cage Warriors bringing fighters and fans together for an explosive showcase in Sweden for the very first time.

And now, two of the biggest names in Scandinavian MMA have received their opponents. For 5 years, Denmark’s Nicolas Dalby went on an undefeated 14-fight rampage before a draw with Darren Till in his UFC debut. Now, Dalby returns to Cage Warriors to finish what he started, and make a claim as the best Welterweight in Europe with the world title in his sights. He’ll face surging Italian American Carlo Pedersoli Jr, who makes his Cage Warriors debut on a 6-fight win streak. Pedersoli has finished his last 3 opponents in the very first round, so will have more than enough firepower to match Dalby’s knockout potential and make this main event one to remember.

“I can’t wait to fight again, and it’s even better to have my comeback fight in what I consider my backyard,” says Dalby. “I had several offers from other organisations but I had no doubt Cage Warriors was the right choice.

“He’s a solid opponent that by the looks of it can threaten me in every aspect of the fight. I will be showing up ready for an all out war. I will take home the victory and take a piece of him with me.” 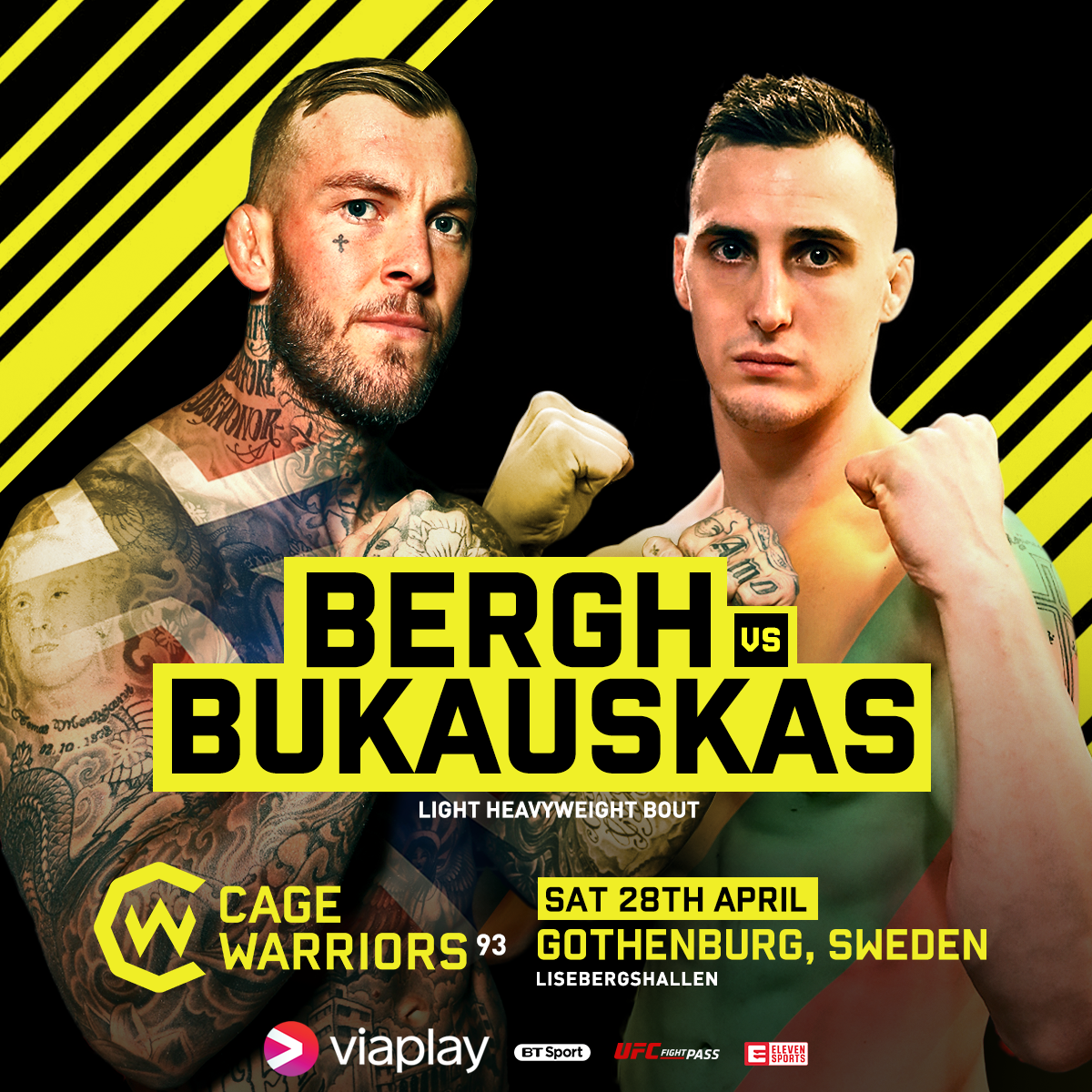 Bergh vs Bukauskas is another fight that has very real potential to end within the distance. Bergh has crashed through the European Light Heavyweight scene like a wrecking ball since his debut, picking up five first-round stoppages in his unbeaten reign since 2013. Modestas Bukauskas is fighting fresh off a dominant submission finish at CW92: Super Saturday, Cage Warriors biggest event in recent years, which caught the eye of the promotion’s President Graham Boylan. Bukauskas asked for the next toughest fight they could find him, and got it.

With these two bouts topping a stacked bill filled with many of the most exciting Scandinavian fighters outside of the UFC, CW93 looks to be an unmissable night for fight fans in the region.

Also recently confirmed for the undercard is a lightweight bout between England’s Perry Goodwin and Rafael Macedo, fighting out of Gothenburg, who makes a hometown appearance. An opponent for Norwegian middleweight prospect Thomas Robertsen is soon to be announced.

Michael Conlan: Success down to my honesty as much as my skill