UFC Liverpool: Through the lens of a scouser

I take my seat at the Echo Arena.  Upper tier on the River Side, block 12, row KK and seat 324.  Looking around I admire the view from my seat.  Its round 2 of the first fight of the evening between Elias Theodorou and Trevor Smith.  The arena, despite being only the first bout is nearly filled already.  I have sat in this arena before for MMA events.  But this is different.  This is not just any MMA event, this is the premier MMA event in the world, and it’s in my own city. 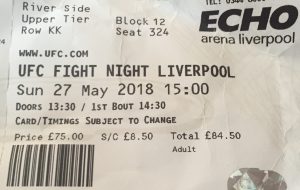 There is a buzz in the air which comes about naturally with an event of this magnitude.  You could sense on arrival it was going to be a special night.  It needed to be a special night.  The weekend for the city had already come with disappointment.  Liverpool the night previous had lost the champions league.  Heartbreaking for any Liverpool supporter.  Whilst earlier in the day, fans of UFC: Liverpool were subjected to uncertainty around the main event.  Darren Till, the man everybody was turning out for had missed weight.  From the start, we said the weekend of the 26th May had the potential to be a phenomenal weekend for sports fans in the city.  But also had the potential to be a weekend we would want to forget for a very long time.

The 2nd fight of the evening came in the way of Molly ‘Meatball’ McCann.  She would be the only other scouser joining Darren Till on the card. The former Cage Warriors Flyweight Champion was stepping up into the big league.  The excitement raised as McCann made her walk.  If this is the reaction McCann was getting, how would we react to Darren Till?

Her opponent Gillian Robertson followed out after.  The boos echoed around the Echo.  Robertson was now public enemy number one.  We hated her.  Yet the reception did no faze Robertson.  Who utilised the takedowns against McCann who is primarily a striker.  Fans of McCann where worried.  Chants began to ring around the arena.  Urging Molly to get back to her feet. In a moment of silence, a fan yelled ‘get up Molly you Bean head!’  The crowd laughed in hysterics.  But focus quickly shifted back to motivating Molly.

In the second round, Robertson slipped the arm around the neck of McCann and won via rear-naked choke.  Silence.  Molly had been choked unconscious.  A few worrying seconds passed before McCann got back to her feet.  Applause for the young scouser.  Followed by applause for Gillian Robertson.  This weekend wasn’t going the way any of us predicted at all.

The rest of the card followed.  With some good and entertaining bouts on the card.  Such as Tom Breese finishing Dan Kelly after a two-year layoff.  With a TKO victory in the first round.

Darren Stewart scored a second-round TKO victory against Eric Spicely.  Getting the crowd excited and pumped with his finish.

And another Englishmen, Arnold Allen pulling off a submission victory in the 3rd round against Mads Burnell.  A fight which he was losing on the judge’s scorecard.  Followed by a victory from Neil Magny in the co-main event.  Which meant only one thing.  It was time for the main event of the evening between Darren ‘The Gorilla’ Till and Stephen ‘Wonderboy’ Thompson.

The lights in the arena dimmed to almost darkness, followed by the pre-fight video.  It was hard to hear what was being said in the video due to the noise from the crowd.  Anticipation for Till’s walkout had reached its climax.  Till’s walkout music came on, ‘Sweet Caroline’ by Neil Diamond came blasting through the speakers.  The arena erupted singing the famous song.  Till walked out.  His walkout becomes a blur.  Everybody is ecstatic, singing and throwing arms in the air.  Till enters the octagon, at this point the noise is deafening. There not a seat sat in the crowd as everybody in stood up.

Next comes ‘Wonderboy’.  Thompson is not a fighter it feels natural to boo.  One of the nicest guys in the fight game. However, the boos yet again erupt around the arena for the enemy.  From directly behind me I hear ‘come on Wonderboy’.  Three girls from North Wales are sat behind me.  They are Thompson supporters.  One of them is screaming at the top of her lungs. Everybody laughs.  Admiring their bravery for sitting in enemy territory and remaining so passionate.  Everybody wishes each other good luck.

The fight begins.  Songs about Darren Till echo around the arena. It’s at this stage the next 25 minutes become a blare yet again.  Anytime Till steps forward the arena erupts, every time he throws his hands out the stomping gets louder.  At the time I felt the fight wasn’t close, just because of the way the arena exploded every time Till moved.  I like many others was totally absorbed into the atmosphere.  It wasn’t until the next day, getting the chance to re-watch the fight I realised how close the fight was.  I will admit I was caught up in the moment.  However, I still believe Till won.

But during the time period, it felt like Till dominated every second.  The crowd played such a pivotal part in creating this image of domination from Till.  Whilst in reflection, the contest was a lot closer.

Till drops Thompson in the last round.  We all believed it was over.  The arena was jumping up and down in unison.  However, Thompson survived.  Taking the fight to the judges’ scorecard.  At this moment, nobody in the upper-tier believed Till had lost.  Everybody was confident of a Till victory.  Yet we waited anxiously for the scorecards to be called out.   Bruce Buffer reveals the decision, ‘Winner by unanimous decision Darren Till’.

The post-fight interview with Till conducted by Dan Hardy fired the crowd up once more.  Till was passionate, charismatic and used highly colourful language.  He said the C word.  The crowd went mental, he had said the C word!  We dangled off every word he said.  With each word, the crowd appeared to get louder and louder.  He then stepped out of the cage and everybody wanted to get to him.  From cage side up to the heavens of the arena, everybody reached forward.

Darren Till had done it.  He had brought the UFC to Liverpool, he had won and he also saved a weekend which was on the brink of disaster.