The UFC has today announced that Danny “Hot Chocolate” Roberts will take on Alan “Brahma” Jouban in an exciting welterweight clash at UFC FIGHT NIGHT: VOLKAN vs. SHOGUN which takes place in Hamburg on Sunday, July 22.

Both fighters will be looking to continue their successful starts to 2018 following stunning knockout performances earlier in the year. Another win for either Roberts or Jouban will give them back to back victories for the first time since 2016, as they look to break into the top 15 in the UFC welterweight rankings. 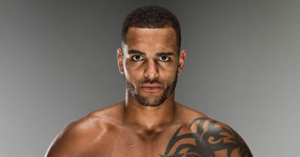 Roberts (14-3); fighting out of Liverpool, England, heads into the bout following his first-round knockout victory on home soil against Oliver Enkamp in March, an emphatic left hook stopping the Swede at UFC FIGHT NIGHT: WERDUM Vs. VOLKOV.

Meanwhile, Jouban (16-6); fighting out of California, USA, will want to add to his equally impressive win at UFC FIGHT NIGHT: EMMETT vs. STEPHENS. Jouban knocked out Ben Saunders in the second round of a highly entertaining bout which was named ‘Fight of the Night’ on the February 24 card.

On the announcement, Roberts said, “I feel like I’ve found my feet in the UFC and one thing I know now is that I’m a bad man in this weight category. I bring too much heat to the game and I’m looking forward to being able to showcase my skills again. It’s going to be a hard night for Jouban.”

He continued, “Jouban is a very good opponent, he’s well known and he’s someone you cannot take lightly. But for me, styles make fights and I believe that I’m a very, very bad match-up for this guy. I cannot wait to go out and prove that. I feel like I’m better than him everywhere.”

All bouts live and subject to change. Bout order TBA.

Tickets to UFC FIGHT NIGHT: VOLKAN vs. SHOGUN are on sale now via Eventim (eventim.de/ufc).