UFC have today confirmed that MMA legend Mark “The Super Samoan” Hunt will meet Russia’s own Aleksei “The Boa Constrictor” Oleinik in a five round main event battle in Moscow on Saturday, September 15.

Ranked No.8 in the UFC heavyweight division, Mark Hunt (13-12-1, 1NC; fighting out of Sydney, Australia) started out his career as a highly decorated kickboxer before turning to mixed martial arts in 2004. Over his 14 year MMA career, Hunt has faced some of the best and most legendary athletes in the world, including Alistair Overeem, former UFC heavyweight champion Stipe Miocic and Fedor Emelianenko.

“I have a lot of respect for Russian athletes, I have fought one of the greatest Russian fighters of all time in Fedor,” commented Hunt, “I think Oleinik will be tough like me, but I will bring my best to this match and he is going to have a long night if he makes it out of the second or third round. My style will win me this fight.” 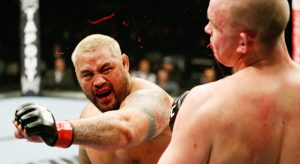 Not many UFC athletes can match the experience that Hunt brings to the Octagon, apart from Aleksei Oleinik (56-11-1; fighting out of Moscow, Russia). Beginning his mixed martial arts career in 1997, the past 21 years has seen Oleinik build up an impressive record. Not known to let his fights go the distance, with his last 15 wins being finishes and 41 total submissions in his career, Oleinik will be looking for a crowd pleasing stoppage as he faces his toughest UFC challenge yet.

“If I do not fall under Hunt’s cannon, then it will be difficult for him to extricate himself from my arms,” Oleinik predicted of his upcoming bout, “I’m so happy to be a part of Russian MMA history by headlining the first UFC event in Russia. The fans can expect a legendary event, a legendary name, and legendary quality of fights in Moscow – and they will get it!”