It has been 13 months since Joanne Calderwood last stepped inside the Octagon but the popular Scottish UFC star promises fans are about to see the best Jojo ever when she meets Brazil’s Kalindra Faria in a flyweight bout at UFC Fight Night 135 in Lincoln, Nebraska this weekend.

Saturday’s bout marks Jojo’s first return to the flyweight division since defeating Valerie Letourneau over two years ago, a performance that many feel was the Kilmarnock star’s finest to date.

Calderwood has predominantly competed in the UFC as a strawweight but the weight cut has often been as tough, if not tougher, than the fight itself for the 31-year-old.

Now, with the prospect of finally fighting in her natural division and the added bonus of a new coaching team behind her, Jojo feels she is in the best shape of her life and suggests Kalindra Faria is in for a rough evening on Saturday.

Jojo said: “I’m really looking forward to this fight and it’s so much more exciting to know that I’m finally fighting at flyweight.
“When I moved to Vegas I went to the UFC’s Performance Institute and I now know that if I want to be healthy and be the best fighter I can be then I need to compete at flyweight. That has given me a lot of confidence, in fact, I’m now wondering how the hell I ever made strawweight. 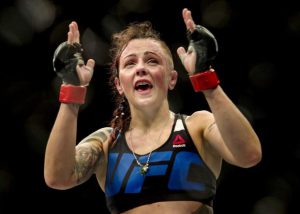 “This whole camp I have trained the right way and I have also been fuelled the right way; I don’t have to starve myself or over-train to get my body down to strawweight.

“I feel like my body is completely different to what it was for my last flyweight fight, I don’t have to cut all that weight and go into a fight malnourished”.

Jojo has always maintained that fans have not seen the best of her in the UFC as she felt the cut to strawweight was not conducive to showcasing her true potential. And on the evidence of her previous outing at 125lbs – a dominant victory over the top ranked Letourneau – this is a sentiment that would certainly ring true and Jojo feels Faria might just be the perfect opponent to prove it.

She added: “Kalindra is a very aggressive fighter and she has a lot of experience but I have watched all of her fights and we have a game plan.

“When I got her name and watcher her footage I got so excited for this fight as she is a striker that is not scared to stand. Striking is the most exciting part of this sport, the fans love to see fighters standing in front of each other to bang and that’s what I do best.

“Everyone knows I’m a stand-up fighter and I feel that she as an opponent will give the fans the chance to see what I can really do.

“My killer instinct is there and I will be more powerful and faster than I have ever been before”.

Watch UFC FIGHT NIGHT: GAETHJE vs. VICK live on BT Sport from 1 am BST on Sunday, August 26, or catch Joanne fight on the Early Prelims exclusively on UFC Fight Pass from 11:30 pm BST on Saturday night.