by Frankie Anderson
in MMA News
1

The main event of the fight night will feature the clash between Brazil and France. Rodrigo Cavalheiro representing Brazil will face Abdoul Abdouraguimov representing France. Cavalheiro comes after his second victory in the promotion after he became the second fighter to deal a knockout loss to Karl Amoussou after Ben Askren. At the same time, Abdouraguimov has handed over a first-round defeat to Sidney Wheeler who had defeated Pawel Kielek in the welterweight division. Kielek had ended up defeating ex UFC talent, Mehdi Baghdad during Brave 12. The bout will be crucial in determining the next title contender in the welterweight division which is headed by Jarrah Al Selawe as the current champion.

In the co-main event, Jeremy Pacatiw will face Uloomi Karim. Jeremy Pacatiw from Team Lakay, Philippines is the fighter with the most appearances in Brave Combat Federation. Pacatiw will make his seventh appearance in Brave Combat Federation with the 17th edition of the event. Uloomi Karim from Team Fight Fortress will be the first Pakistani fighter represented in a co-main event of the promotion. The bout will also mark Team Fight Fortress facing Team Lakay which is among the best MMA fight team in Asia. In other fights in the fight card, Egyptian lightweight superstar, Ahmed Amir will face John Brewin from New Zealand, Frans Mlambo from Ireland will face Aidan James from Wales, Mehmosh Raza from Pakistan will face Arben Escayo from the Philippines, J P Buys from South Africa will face Gamzat Magomedov from Russia, Yibugele from China will face Zia Mashwani from Pakistan, Haider Farman from Pakistan will face Ariel Oliveros from the Philippines and Najam Khan from Pakistan will face Mohammed Wasim from Afghanistan. Abbas Khan from the Bahraini national team who trains at KHK MMA Bahrain will compete in the opening bout of the night in an amateur fight.

The event will be broadcasted live on Abu Dhabi Sports in the Middle East and North Africa. Brave Combat Federation has announced that Brave TV, an initiative developed in Bahrain will make sure that digital broadcast will be facilitated live by pay per view in geographies that do not have existing broadcast partners for the promotion. 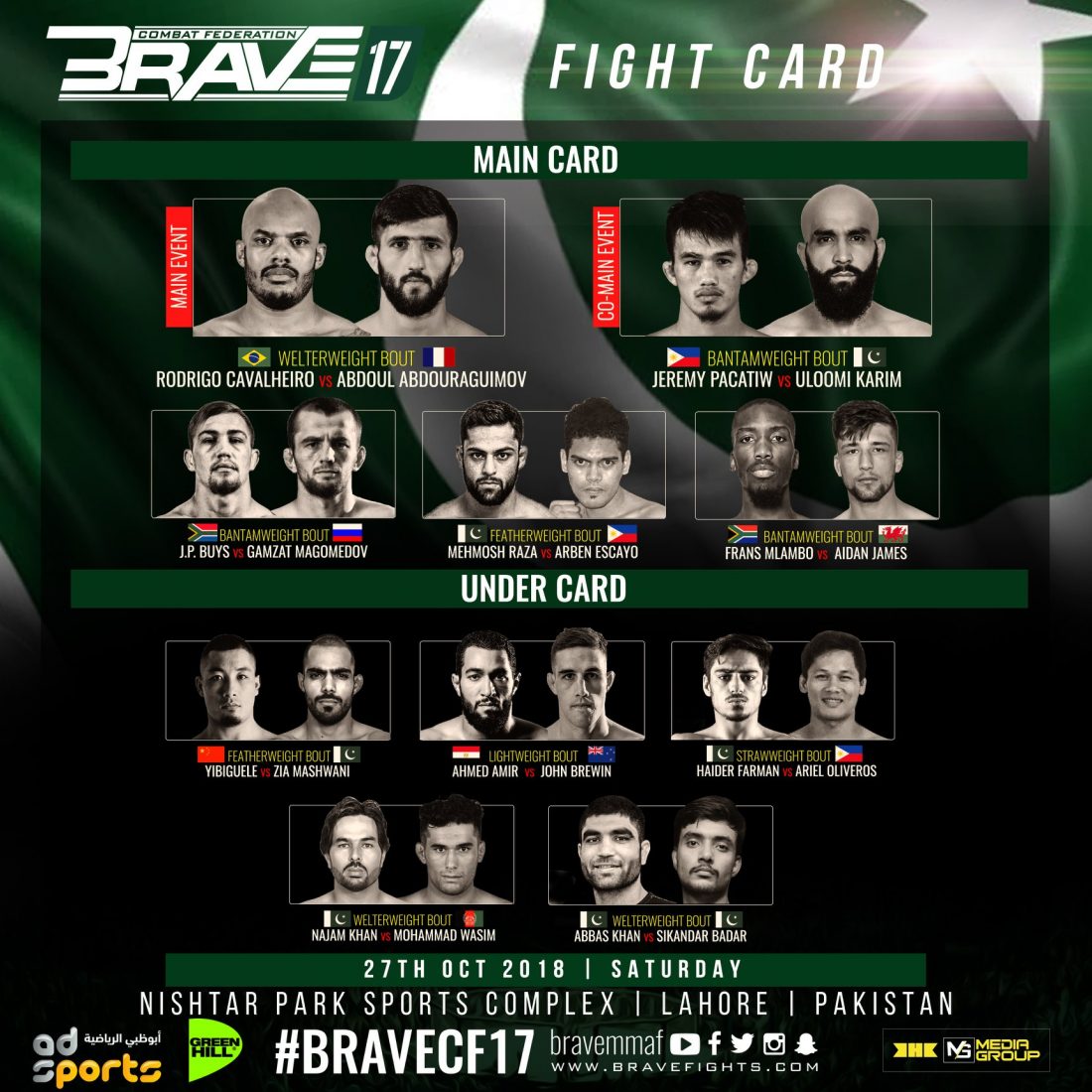