The Curious Case of Renan Barao

by Mike Bradley
in UFC
3

One of the Greats?

Once considered by many to be the number one pound-for-pound Mixed Martial Artist in the world, Renan Barao now looks a forlorn figure in the UFC. At thirty-one years of age, he should still be in his physical prime, so what has happened to the once great Brazilian?

Barao had an inauspicious start to his pro MMA career in 2005, losing his first fight, in his native Brazil, by unanimous decision to Joao Pablo Rodriguez on the 14th April. It was not the start that he would have wanted but little did we know the winning streak that would follow that initial set back.

Starting almost exactly one month later, Barao would begin a run that would, eventually, take him to UFC Bantamweight Gold.

He picked up his first victory against Melk Freitas by TKO on 13th May 2005. That year also saw Barao win two more bouts in convincing fashion, one by rear naked choke and the other by a first round knockout.

The wins kept coming in 2006; one by kneebar, one by TKO and a close split decision against Rony Jason. 2007 was heading in a similar direction – 3 submission wins and a decision. In his last fight of that year, however, he took an illegal soccer-kick from Claudemir Souza in the first round at an event in his native Brazil. He was deemed unable to continue and the fight was later ruled a “no contest”.

In 2008 he bounced back from the minor setback of the n/c with his busiest year to date. Incredibly, he fought seven times – including two fights in one night at Watch Out Combat Show 2 in Rio de Janeiro. At the end of all seven fights, Barao had his arm raised in victory – 4 finishes and 3 unanimous decisions.

2009 brought more victories – 5 in total. 2010 another 3 – including an impressive first-round submission of the talented Chris Cariaso.

2011 saw Renan Barao compete for the first time in the UFC. The date was May 28th, the venue was MGM Grand Garden Arena in Las Vegas, at UFC 130. His opponent was Cole Escovedo. He was the very first fight on the card and prevailed with a unanimous decision victory.

Less than 6 months later, at UFC 138 in Birmingham England, he would face home favourite Brad Pickett – who a year previously had handed Demetrious Johnson his first ever defeat. They came out swinging in the first round, both landing significant strikes but it was a devastating knee to the head that signalled the beginning of the end for Pickett. After knocking Pickett down, Barao was able to take his back and secure a first-round finish by Rear Naked Choke. It was an electric match and Barao had arrived on the big scene. If the MMA world didn’t know who Renan Barao was before this fight, they certainly did now. Commentator Joe Rogan’s first words following the end of the match were “Renan Barao is a monster!”

2012 saw Barao have two more fights. The first was a unanimous decision victory against Scott Jorgensen at UFC 143. On July 21st he would come up against his most difficult test to date. At UFC 149 in Calgary, Alberta Canada, Barao would face fan favourite Urijah Faber for the UFC Interim Bantamweight Championship. This was due to the injury of Dominic Cruz. It was a dominant performance by Barao but it went the distance. The judges scored the bout 49-46, 50-45 and 49,46.

2013 saw two convincing defences of his interim title. Firstly against Michael McDonald at UFC on Fuel TV. Barao secured victory in the 4th round via arm triangle choke. At UFC 165, Barao would defend his title for the second time. This time against Eddie Wineland. In the second round, Barao landed a stunning spinning back kick and followed up with some ground strikes before Yves Lavigne stopped the fight.

At UFC 169 in New Jersey, Dominic Cruz was scheduled to return from injury to face Barao but was struck down yet again – this time by a groin injury. Following this latest setback, Cruz vacated the title and Barao was named Undisputed Bantamweight Champion. As a result of Cruz’s inability to fight, Urijah Faber got the rematch against Barao that he so desperately desired. However, Barao knocked Faber down 3 times in the first round before Herb Dean stopped the fight as Barao rained down hammer fists. Faber could only cover up. Barao now had a 32-1-1 record and was one of, if not the most dominant MMA fighter in the world.

On May 24th at UFC 173 in Las Vegas, Barao faced the young up and coming TJ Dillashaw (10-2) – a prodigy of the twice fallen Urijah Faber. In a huge upset on the night, TJ Dillashaw stopped Barao in the 5th round following a brilliant head kick and follow up strikes. It was, at that point, one of the biggest upsets in UFC history. Barao had seemed unbeatable for so long but now his run was over.

Barao fought again in December of 2014 and seemed back to his usual self, stopping Mitch Gagnon in the third round via arm triangle choke. It was enough to book him a rematch against TJ in 2015.

That fight took place at UFC on Fox on July 25 2015. Barao came into the fight confident that he would avenge his lost a year prior. However, it was not to be. TJ stopped Barao again, in more emphatic fashion – punishing him with punches that Barao had no answer for, in the 4th round.

From then till now…

Since then Barao has remained active, fighting a further 5 times to date. However, he has looked a shadow of his former self. Only picking up a single decision victory in those last 5 fights. He lost via decision to Jeremy Stephens, Aljamain Sterling, Brian Kelleher and, most recently – on September 18 – Andre Ewell.

So what has gone wrong for Barao? There can be no doubt that since his losses to TJ Dillashaw, Renan Barao has not looked anything like the fighter that he did up until those fights. He has looked hesitant and uncomfortable in the Octagon. Where there was once a confident swagger, there is now a look of loneliness and longing to be elsewhere. The once great champion is now not even mentioned when it comes to discussions on who is the greatest the sport has ever seen. But can the dramatic downturn in results all be down to confidence and motivation? Maybe. Or maybe the game just caught up with Renan Barao. There can also be little doubt that the level of performances in MMA, in general, has risen in recent years. Maybe it’s a case that the sport has continued to evolve but Barao’s game has not. Whatever the cause, it saddens me to watch this former champion these days. I prefer to remember the spinning back kick stoppage of Eddie Wineland or the stoppage victory against Faber – a time when Renan Barao was truly great. I retain a little hope that he can climb the ranks once more but I don’t have baited breath… 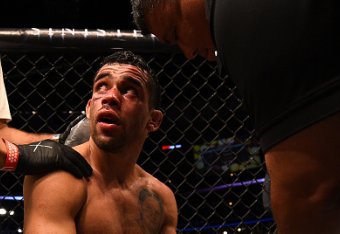