Daniel Cormier and Derrick Lewis are set to headline a huge card this weekend at Madison Square Garden, New York City. The critical pay-per-view event will determine the future of several fighters, including Brock Lesnar and Jon Jones. Both are looking to match up with Daniel Cormier for his final time in the octagon.

UFC 230 is a massive event with the main card stacked with quality matches. The main card is predominantly filled with fights in the middleweight division, it’s only the main event being contested at heavyweight.

The event has gone through a lot of ups and downs in the months building up to fight night. It started with a co-main event featuring Nate Diaz and Dustin Poirer. The two lightweight fighters were supposed to square off, until the fight was scrapped after Poirer pulled out due to injury.

If that wasn’t enough, the event took another huge blow. The much anticipated rematch between Luke Rockhold and Chris Weidman was called off, after Rockhold picked up an injury. Weidman will now be head-to-head with Jacare Souza. 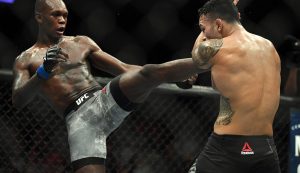 Derek Brunson and Israel Adesanya will open the main card. Brunson has been in and out of the middleweight top ten rankings over the last couple of years, while Adesanya has been storming up the rankings since joining the UFC in February 2018. This will be Adesanya’s fourth outing this year, coming off unanimous decision win and earning a performance of the night bonus against Brad Taveres.

Brunson will be coming into this fight after losing to Jacare Souza. He will have to shake himself off and be ready for his clash with Adesanya.

The undefeated Adesanya is 14-0 with his last three fights in the UFC. He holds one knockout victory, two decisions and two performance of the night bonuses.

A win here for Adesanya could bring him closer to a title shot next year.

Karl Roberson won a contract after featuring on Dana White’s Tuesday Night Contender series. What’s this? MMA on a school night what madness. Roberson looked good in his debut against Darren Stewart winning by rear-naked choke. His undefeated winning streak was cut short at UFC 224 when he got caught in a submission by Cezar Ferreira.

Jack Marshman is a lot more seasoned, holding a record of 22-7 to Roberson’s 6-1. In the UFC he has two wins and two losses.

This could be an early night for Roberson if Marshman takes it to the ground.

In the third middleweight fight of the night we see David Branch take on Jared Cannonier. Branch hasn’t been in the UFC long but is coming into this fight off a big win over Thiago Santos. The knockout victory earned him a performance of the night bonus, and he holds an impressive 22-4 record. In fact, he has only lost once in his last 13 fights, which came at the hands of Luke Rockhold.

Cannonier on the other hand has been in the UFC awhile but has lost 3 of his last 4 fights. He may not have got the wins but he’s been involved in some high profile fights against the likes of Glover Teixeira and more recently Jan Blachowicz.

A win here for Branch would give him a solid case for a rematch with Rockhold.

Does anyone remember when Chris Weidman was a UFC Champion? If Weidman can get past Jacare Souza tomorrow night, it could catapult him back into title contention.

Weidman suffered devastating back-to-back losses against the likes of Rockhold who stole his title, Yoel Romero who crushed his spirit and Gegard Mousasi who nearly ended his career. In his last outing he knocked out Kelvin Gastulem which set him up for a rematch with Rockhold, at least until he pulled out due to injury.

Unfortunately he’s facing a deadly opponent in Souza. One of the best middleweights in the division who has racked up a string of performance of the night bonuses. Though he has lost some big matches against Robert Whittaker and Yoel Romero a win here will bring his name in the pot for title contention. This is a fight not to be missed with so much on the line for both fighters.

Where did this fight come from? Daniel Cormier won the heavyweight title back in July. And in his post-fight talk with Joe Rogan, an unexpected guest muscled his way into the octagon. It was Brock Lesnar, and in a heated confrontation with the new champion, the next title fight was set.

Things took a complete u-turn when UFC 230 suffered injuries, which saw the UFC take action and book Cormier vs. Lewis. It’s a quick turnaround for Derrick Lewis, who only fought less than a month ago. He’s coming into this fight after a last-minute knockout over Alexander Volkov at UFC 229.

While Cormier has a had a few months since he took the title from Stipe Miocic. Being the fresher man and having a strong wrestling background Cormier is the favourite in this matchup. This should serve as a good tune-up fight ready for the Lesnar bout.

Lewis has incredible knockout power and can never be written off. It could even be argued that he intelligently plays possum to land his big right hand.