Former featherweight kingpin Jose Aldo returns to the Octagon on February 2nd 2019 at UFC in Fortaleza, Brazil against Renato Moicano.

Brazilian Jose Aldo (27-4-0) was on an 18-fight win streak before losing his UFC Featherweight belt to Conor McGregor (21-4-0) at UFC 194 in December 2015 – the infamous 13 second KO. After McGregor was forced to relinquish his featherweight belt when he took the Lightweight championship from Eddie Alvarez (29-6-0, 1NC) at UFC 205 in November 2016, the belt was returned to Aldo. 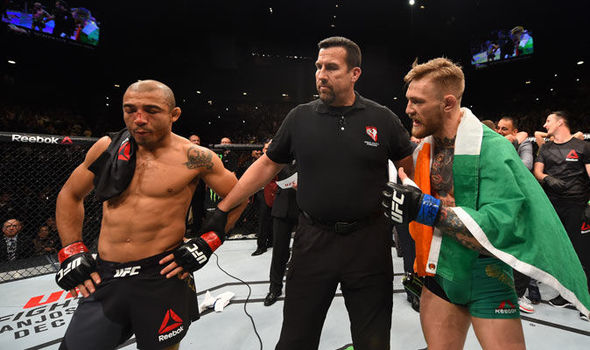 But at the same time, Max ‘Blessed’ Holloway (20-3-0) held the Interim Featherweight championship. The two clashed at UFC 212 in July 2017 to determine the true featherweight champ and Holloway came out victorious, earning a TKO over Aldo in the late third round.

Holloway was due to defend his belt for the first time against Frankie Edgar (23-6-1) at UFC 218 in December 2017 but Edgar, unfortunately, had to pull out. A last minute replacement was found – Jose Aldo.

In their first fight, Aldo was holding his own on the feet in the opening rounds but the tables turned and a long, brutal ground-and-pound from Holloway finished the fight. When debating the greatest featherweights, Aldo and Holloway are usually the names that come up. So a second fight to truly determine who is the best out of these two was welcomed by MMA fans.

The second fight went more or less the same way as the last – Holloway winning by TKO in the late third round. Having had his character destroyed on a global platform by McGregor and then being unable to reclaim his featherweight crown, many thought that could be the end for Aldo.

In July 2018, Aldo fought Jeremy ‘Lil Heathen’ Stephens (28-15-0) and won by TKO in the first round – a devastating liver shot against Stephens set up the TKO finish. This first round finish reminded us that perhaps Aldo still has more to give.

How many more fights do you think Aldo has in him? And can he reclaim the featherweight belt before retiring? Have your say in the comments below.

Dalby, Madsen and Burnell confirmed for CW103 in Copenhagen