by Peter Knox
in UFC
6

The former UFC lightweight and featherweight champion has called out Japanese start Tenshin Nasukawa on Twitter.

Nasukawa fought Floyd Mayweather Jnr in an exhibition boxing match on New Year’s Eve in Japan as part of the Rizin MMA banner. The rising Japanese star and golden boy of the promotion got dropped three times in the first round before Nasakuwa’s corner threw in the towel for him, with Mayweather‘s record now 52-0.

I wish to go to Tokyo to face Tenshin Nasukawa in a Mixed Martial Arts exhibition bout.
Before this summer.
Please arrange this, this instant.
Yours sincerely
The champ champ. @ufc @ParadigmSM

Notice how McGregor calls specifically for a Mixed Martial Arts exhibition bout rather than a boxing rule set. He will be looking to undermine Mayweather’s victory by defeating Nasukawa at his own game.

When McGregor fought Mayweather the fight became bigger than them. It was boxing vs MMA – two sides of the same coin fighting for legitimacy. McGregor was undoubtedly the biggest star in the western MMA market and Mayweather reminded us that the best of MMA can’t necessarily hang with the best of boxing in the ring. 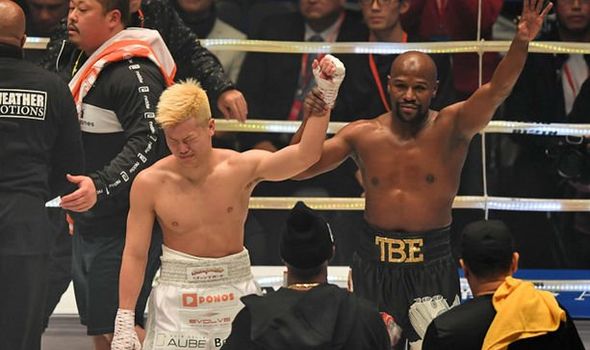 Floyd has now done the same thing in the other leading MMA market – Asia.

Conor McGregor has made a habit in his career of taking on challenges where the odds are against him – fighting Mayweather in the ring, demanding his rematch with Nate Diaz be at welterweight again, even allegedly teasing an early takedown from Khabib just to see what it felt like.

If McGregor was to fight Tenshin in a mixed martial arts exhibition, not only would it be a huge event for the fighters themselves but also huge for the sport of MMA as it would show what they are truly capable of when not hampered by boxing rules, maybe taking the shine away from Mayweather’s victories over them both.

Check out these Tenshin Nasukawa highlights:

Jones vs Smith and Woodley vs Usman set for UFC 235