Till vs. Masvidal Confirmed As Main Event For UFC London

by Peter Knox
in UFC
5

Today, UFC® confirmed that welterweight and Liverpool legend Darren Till (17-1-1) will fight American Jorge Masvidal (32-13) in the main event at the highly anticipated UFC FIGHT NIGHT® LONDON on Saturday, March 16, at The O2. 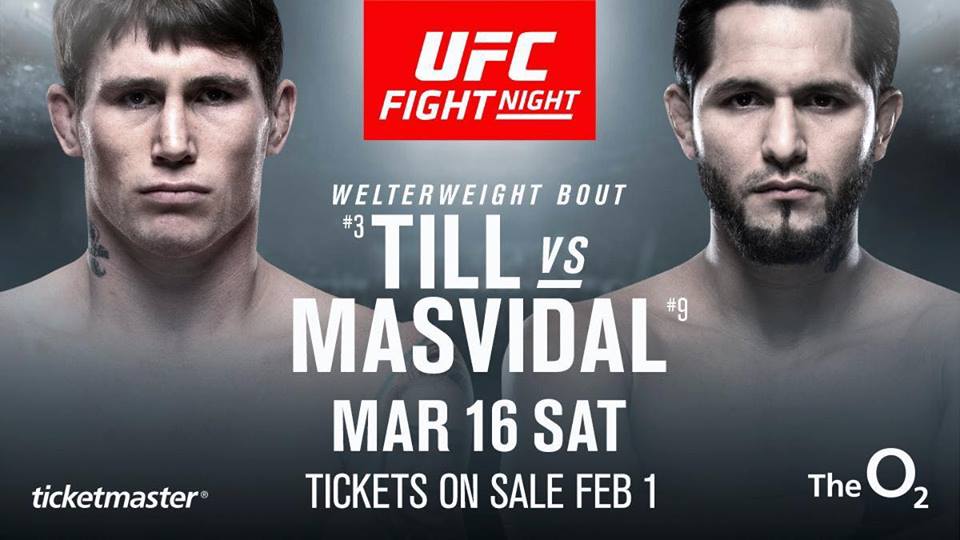 Following a rapid rise to stardom through four straight victories over the likes of Jessin “Abacus” Ayari and Stephen “Wonderboy” Thompson, Darren “The Gorilla” Till will be looking to get back on the winning path against Jorge “Gamebred” Masvidal following his recent defeat to Tyron “The Chosen One” Woodley. Masvidal approaches the bout off the back of two losses but will be confident of stage an upset in front of the London crowd.

Co-headlining the event is fellow welterweight Leon Edwards (8-2) who faces Iceland’s Gunnar Nelson (8-3). Edwards is currently on a six-fight win streak having most recently beaten Donald Cerrone by unanimous decision at UFC FIGHT NIGHT® SINGAPORE. Nelson will also be looking to build on his last victory against Alex Oliveira at UFC 231®.

The pair join an additional four confirmed bouts on the card, including:

Fans are advised to register their interest via ufc.com/London to gain early access to tickets, and to follow @UFCEurope on Twitter for all the latest updates.

Tickets to UFC FIGHT NIGHT® LONDON go on general sale on Friday, February 1, via AXS and Ticketmaster. Fight Club members will have the opportunity to purchase tickets early on Wednesday, January 30, whilst those who registered their interest early in this event will gain access on Thursday, January 31.