The Rise of Dustin Poirier

Dustin “The Diamond” Poirier has been one of my favourite fighters for a number of years now, and for good reason. You’ll struggle to name a boring Dustin Poirier fight. The man captures what it is to be a mixed-martial-artist in and out of the cage. Possessing one of the best work ethics in the sport, Dustin finally got his long-awaited taste of UFC gold this past weekend when he squared off against Max Holloway for the second time in the main event that did not disappoint. With a fight against the undefeated champion Khabib Nurmagomedov looking to happen later this year, He’s now just one step away from reaching the ultimate goal. 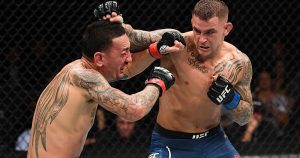 Entering the UFC in 2011 with a record of 8-1, Poirier looked to be a promising prospect with lots of potential. For the next 4 years, Dustin would compete at featherweight, putting on some memorable performances and instant classics. His fight with The Korean Zombie remains one of the most thrilling featherweight fights in the organisation’s history.

However, while struggling to make the cut down to 145lbs, Dustin felt as though his body wasn’t reaching its full potential. So, in 2015, he made his UFC lightweight debut and never looked back. Currently, at 9-1 at 155lbs, Dustin has really hit his stride and is now on top of a 5 fight win streak.

With wins over the likes of Yancy Medeiros and Joe Duffy, Dustin started to make a name for himself in the division. But it wasn’t until after a minor hiccup against Michael Johnson that Dustin really started to build momentum. Dustin hasn’t lost a fight since and is now on what is easily the best run of his career. Finishing former UFC champions Anthony Pettis & Eddie Alvarez as well as former WSOF champion and top contender Justin Gaethje. And most recently, defeating UFC featherweight champion Max Holloway for the second time. With each of these fights being classics. 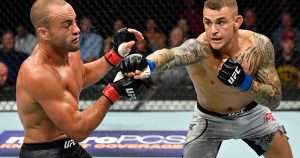 Not only does Dustin Poirier put on a show every time he sets foot in the octagon, but he rises to the occasion no matter who, when or where. He continues to be a perfect example of how an athlete can grow not only as a fighter but as a person. Dustin is a class act outside of the cage as well as in it. The Louisiana native has now made it a recurring effort to donate his fight kit from every bout he has for various different local charities, using his very own platform launched by him and his wife known as “The Good Fight Foundation.”

As a longtime fan of The Diamond, it was a proud moment to see him get gold. He well and truly earned it. Years of hard work paid off. His recent fights have each been a pure showcase of skill, heart and determination. And as cliche as that list may sound, it’s frankly a rare combo found in mixed martial-artists of today.

It seems as though he’s finally getting the recognition he deserves. Dustin Poirier is now one step away from being the UFC lightweight champion, and with his current form, I wouldn’t count him out against anyone. Do you think he has what it takes to dethrone Khabib?